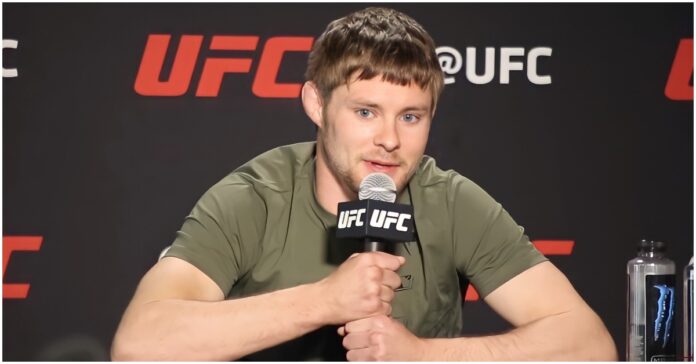 This past weekend, ‘Thug Nasty’ picked up the biggest win of his career when he beat Edson Barboza over three rounds at UFC 272.

In the build-up to the biggest fight of his career, Mitchell was more interested in talking about politics than MMA.

During the UFC 272 pre-fight media day, the 27-year-old vented about the Russian-Ukraine war, he said.

“My first thought is, I’m not going nowhere to fight none of these wars for these politicians. I’m staying at home and when the war comes to Arkansas, I will dig my boots in the ground and I will die for everything I love and I will not retreat.

“If this country is invaded and everybody’s saying well, ‘we got to evacuate. we got to leave,’ I will not. I will dig my boots in Arkansas soil and I will fight for the people that I love, for the land that I love and the way of life that I love. But I’m not going overseas to fight.”

Bryce Mitchell Is Not A Fan Of Joe Biden

Mitchell soon turned his attention to Joe Biden, Hunter Biden, and their dealings with Ukraine.

“I don’t know what’s going on, to be honest, brother, I really don’t,” Mitchell said. “There’s so much stuff and I don’t think nobody knows what’s going on fully. There’s been so much political corruption in that area. You got Biden and his son making a sh*t ton of money off of and using our tax dollars to bribe their people. That’s treasonous in my opinion.”

“He shouldn’t be giving our tax dollars to that country anyway. We got veterans out here sleeping on the street and you’re going to give our frickin’ tax dollars to these Ukrainians. Brother, I don’t know what’s going on over there, but I’m not going over there and fighting. And God bless anybody that’s over there fighting,” he added. (Transcribed by The Blaze)

Mitchell’s impassioned speech has since been widely circulated. Political commentator Dave Rubin even gave ‘Thug Nasty’ a shout-out on the latest episode of “The Rubin Report“, claiming Mitchell made much more sense than the mainstream media.

What do you make of Bryce Mitchell’s Joe Biden rant?