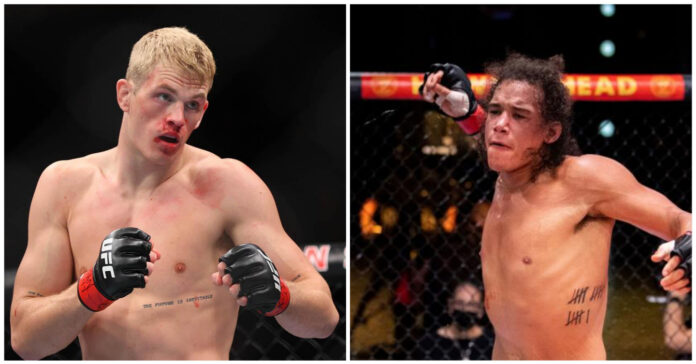 Bryan Battle has revealed that he asked to fight Ian Garry at UFC 276.

The Ultimate Fighter 29 winner Bryan Battle is set to make his welterweight debut in the UFC against Takashi Soto on Aug. 6 at UFC on ESPN 40. Having made his way to the promotion as a middleweight prospect, Battle has decided to go down a weight class with high ambitions ahead.

In an exclusive interview with LowKick MMA, Bryan Battle issued a callout to the rising contenders at 170 lbs, including Khamzat Chimaev, Sean Brady, Shavkat Rakhmonov, and more.

“In a perfect world, if I could fight Sato, then fight Ian Garry, then fight Sean Brady, then fight Rakhmonov, then fight Khamzat, that would be my ideal world. Rakhmonov and Sean Brady are kind of interchangeable because they’re about the same in the rankings.

Battle sees the upcoming Irish star as the most desirable opponent for him in the new weight class.

“I have a wish list, on top of that list is Ian Garry. I know there’s a lot of people who would love to have that fight and I’m one of them. He’s got a lot of hype and I want to steal all that hype. Whatever clout he has, I want to take it.”

The two have even gone back and forth online on more than one occasion. Garry seemed to be accepting of the fight in April when Battle was at 185 lbs.

In a more recent tweet from June 1, Garry responded to Battle’s allegations of him ducking the North Carolina native.

He revealed that he had asked for the matchup earlier for the International Fight Week card of UFC 276 but suggested Garry has a cautious approach to his fighting career.

“He’s probably, at the very least, being protective. I’m not going to say he’s ducking me. He could be. All I’m saying is I asked for that matchup and I was willing to fight July 2nd, in fact, I would’ve loved to fight July 2nd. That would’ve been a dream come true. Then, I saw that he was fighting this guy (Gabriel Green) he just fought.

“I shot my manager a message, ‘c’mon man, what’s up? What do I gotta do to get a fight?’ At that point, I didn’t even have a fight booked. I was like, ‘dang, not only did I not get the fight but the guy I wanted to fight is got taken up and is fighting on the day that I wanted to fight on.”

Battle disputed Garry’s claims of being “The Future” and argued that he indeed is the real deal.

“It is what it is. I’m not going to be too stressed out about it. I don’t actually know Ian, I know he believes what he’s saying, and I gotta show him what he’s saying isn’t true. He thinks he’s the future, I’m the future. I don’t like that. Don’t try to call yourself what I am. If he doesn’t know it yet, then he’ll know it after the fight one day.”