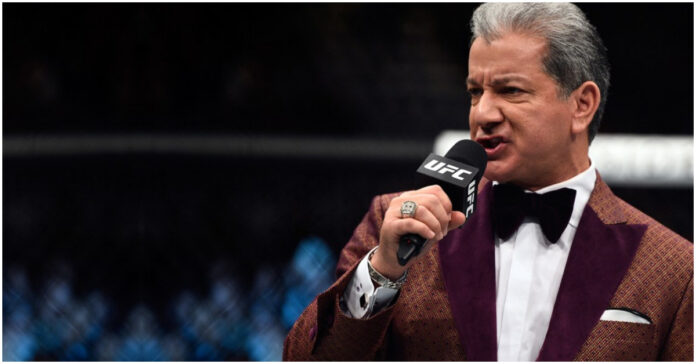 One of the legendary faces that truly epitomizes the UFC brand is that of Bruce Buffer.

On the latest episode of his podcast, ITS TIME!!! With Bruce Buffer, ‘the veteran voice of the octagon’ sat down with Heavyweight King Francis Ngannou to discuss the waves he’s made in the combat sports world as of late.

After beginning the show by showering ‘The Predator’ with his utmost praise and awe, Buffer warned Ngannou about the obstacles one may bring upon themself if they choose to butt heads with UFC Brass.

Buffer also made it known to Ngannou that greener pastures are not always guaranteed to lie ahead.

“No offense to other organizations, but you become irrelevant when you leave the UFC after a while,” Buffer said. “Instead of losing in the UFC your contract is being ended in the UFC and you fall from the Octagon down into the Bellators.” (transcribed by Jesse Holland, mmamania.com)

Of course, Buffer is one of the UFC’s most recognizable employees so to think he would express an adversary view to the company is beyond farfetched. He did however do a stellar job of providing Ngannou with a neutral platform and an unbiased line of questioning throughout the interview.

Buffer asked Ngannou if his third round bodyslam on Ciryl Gane was a predetermined plan of attack or a spur-of-the-moment move, a question Ngannou was glad to answer.

“The strategy was, whatever opportunity came I would take it,” Ngannou said. “My team knew my wrestling, they know my grapple. They know what I’m capable of and what I’m confident of. If he give me that, I will take it.”

Ngannou is slated to be out for up to a year as he will repair a severely damaged knee.

Do you think Francis Ngannou has fought in his last UFC fight?