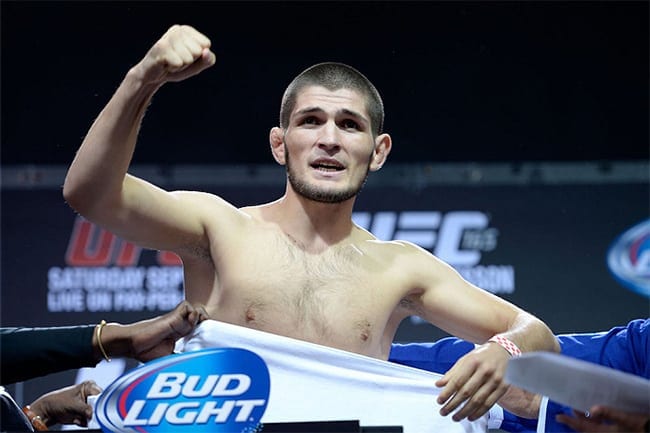 The stage is officially set for this weekend’s (Sat., October 6, 2018) UFC 229 from the T-Mobile Arena in Las Vegas, Nevada. The MMA world is beyond excited to see that Khabib makes weight for his title match-up with Conor McGregor.

Undefeated lightweight champion Nurmagomedov made weight at today’s UFC 229 early weigh-ins. ‘The Eagle’ stepped on the scale at exactly 155 pounds. The champ was clearly looking to make a statement by coming in as the first fighter onto the scales this morning. He did just that because of his early weigh-in. All of the doubt surrounding his weight has been alleviated due to his early appearance.

Watch him make weight with ease via MMAFighting.com:

The UFC’s biggest fight of all-time is set to go off without a hitch. That is if McGregor makes weight. Regardless, the entire sport of mixed martial arts can let out a collective sigh of relief as a result. Khabib will have no issues with being hospitalized or anything else.

Much of the uncertainty surrounding the card was due to Khabib’s ability (or inability) to make weight. Those concerns have been alleviated because of Khabib’s early statement. Will it lead to the biggest win of his career?