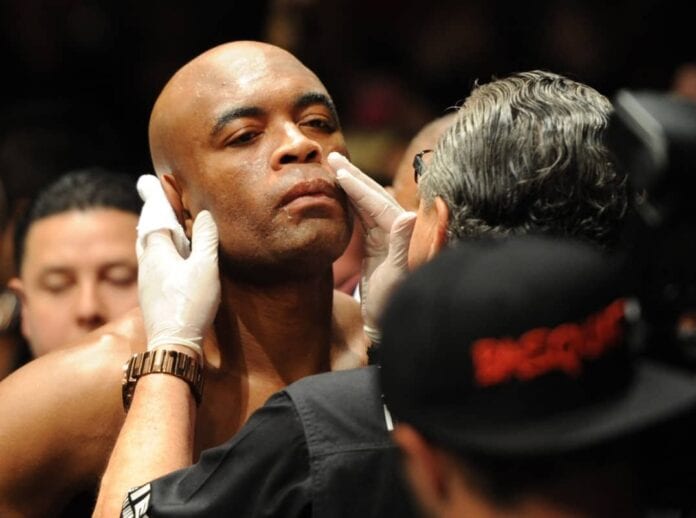 Well, the injury bug always seems to strike on the grandest stages in the sport of mixed martial arts (MMA), and that has once again proven to be true regarding this weekend’s (May 14, 2016) upcoming blockbuster UFC 198 card from Curitiba, Brazil.

According to Yahoo! Sports, former long-time middleweight title holder Anderson “The Spider” Silva has been forced out of his scheduled main card bout with former The Ultimate Fighter (TUF) finalist Uriah Hall.

Apparently Silva has been suffering abdominal pains that may even require him to undergo gall bladder surgery.

The UFC’s medical consultant, Jeff Davidson, commented on the situation:

“Anderson developed abdominal discomfort [Monday and] further evaluation today is consistent with acute cholecystitis,” Davidson said Tuesday. “He will be seen by a surgeon today for possible surgery.”

While this news is certainly unfortunate for fans and for the card, it obviously also serves as quite a negative setback for the 41-year-old Silva as well.

“The Spider” is coming off of a disappointing decision loss to Michael Bisping last February after spending a year on the sidelines due to a 2015 positive drug test for performance-enhancing-drugs (PEDs).

The UFC appears to be searching for a possible replacement opponent for Silva, although it may be difficult to find a man willing to accept the daunting task of clashing with the ultra-dangerous Hall on less than a week’s notice.

Stay tuned as more news becomes available on the situation.