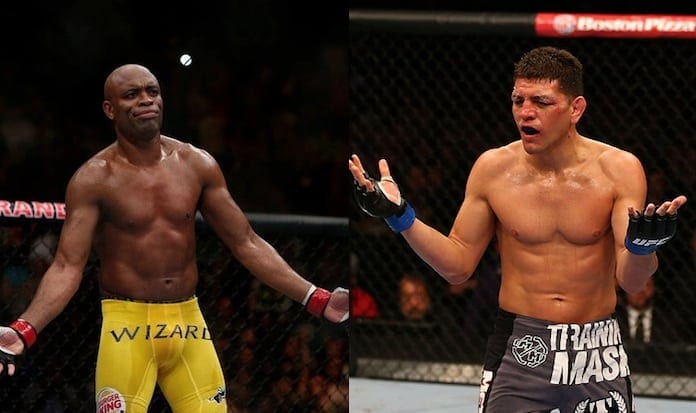 Huge news is now breaking, confirming that UFC legend and former middleweight champion Anderson Silva has been popped for steroids in the wake of his UFC 183 headliner versus Nick Diaz. Not only that, his opponent Diaz was caught for Marijuana. The story was first reported by MMAJunkie.com, who confirm that the UFC has backed this story up.

The official statement from the UFC:

“On February 3, 2015, the UFC organization was notified by the Nevada State Athletic Commission that Anderson Silva tested positive for Drostanolone metabolites on his Jan. 9 out of competition drug test. It’s our understanding is that further testing will be conducted by the Commission to confirm these preliminary results. Anderson Silva has been an amazing champion and a true ambassador of the sport of mixed martial arts and the UFC, in Brazil as well as around the world. UFC is disappointed to learn of these initial results.”

“The UFC has a strict, consistent policy against the use of any illegal and/or performance enhancing drugs, stimulants or masking agents by its athletes.”

This is just crushing news for fans of “The Spider“, but worse for the ex-champion himself. Not being a medical expert, I can’t even start to speculate on what steroid Silva may have failed for, or even if it could have been medically prescribed for his leg.

As for Diaz, I honestly thought he was stoned during the fight, renowned journalists Kevin Iole and Ariel Helwani have more:

Also, per Bennett, Silva tested positive for 2 PEDs on 1/9. The other one found in his system was androsterone.

This is just ground breaking news as Silva holds a near spotless image in the worldwide MMA community. His return from a gruesome leg injury at UFC 168 has now been turned in to something much more sinister, but we’ll hope to learn more on it in the next few days.

What we know for now is that Silva will face a Nevada State Athletic Commission hearing on the 17th of February, and they will temporarily suspend his license to compete. Following further investigations, Silva could face a minimum nine-month suspension from fighting.

This could well be the end of Silva’s career. With the Jon Jones cocaine saga, now the Anderson Silva steroids bust along with another Diaz stoner story, are we losing all our favorite fighters to drugs?