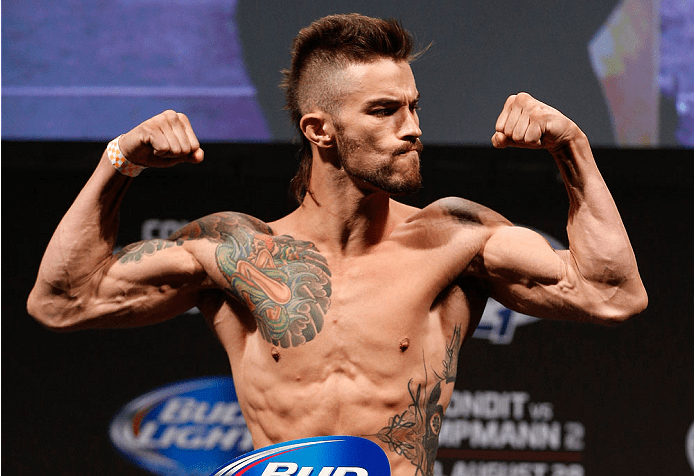 Brandon “Rukus” Thatch debuted in the UFC in 2013, coming in as an electrifying striker possessing eight first round finishes. Thatch quickly made a name for himself, continuing his streak by scoring back-to-back first round TKOs over Justin Edwards at UFC Fight Night 27 and Paulo Thiago at UFC Fight Night 32.

Fans were extremely intrigued by the young killer, but unfortunately the injury bug hit “Rukus” as he’s been out of action ever since. Tonight (February 14, 2015), however, Thatch will return to the Octagon with the opportunity of a lifetime when he takes on former UFC and WEC lightweight champion Benson Henderson in the main event of UFC Fight Night 60 from his home of Colorado.

After the long layoff, Thatch admits that he will feel like a caged up animal being unleashed:

“Any time you get hurt, it’s bad,” Thatch told MMAFighting.com. “It’s more mental than anything. The pain sucks. Everything about being hurt sucks, but it’s more or less just being bored. I felt like a border collie that was stuck in a cage all day.”

A fight against Henderson, a longtime contender, is undoubtedly the biggest fight of Thatch’s young UFC career. Despite it being the main event, Thatch believes fans will take notice of him regardless of where he fights on the card:

“I know no matter where I fight on a card that people are going to enjoy watching me and I’m gonna be an exciting,” Thatch said. “This could be an undercard and I guarantee people will still take notice of me.”

Going up against a fighter the caliber of Henderson will be a very difficult task, especially in just the third fight of one’s UFC career, but Thatch isn’t putting too much pressure on himself. He feels very confident, and fighting in Colorado only assists in boosting that confidence:

“Being in my backyard, I feel unstoppable,” Thatch said. “The energy I get from the crowd is electrifying. If you or somebody is there, you’ll feel it.”

“Rukus” may have lost a year of his prime due to injury, but the explosive and dangerous striker is now back and ready to take on the deep and talented lightweight division. The Team Elevation product is well aware of the challenges he will face, but he’s also aware of the rewards that come with the challenges.

A win over “Smooth” would do wonders to Thatch’s position in the rankings, and he believes that he will be a top 10 fighter very soon:

“I will be in the top 10 absolutely,” Thatch said. “I don’t see any way around that. I’m going to keep winning in impressive manner and I’ll climb the ranks.”

Will “Rukus” continue his demolition of opponents, or will Henderson be able to get back on track in Broomfield?