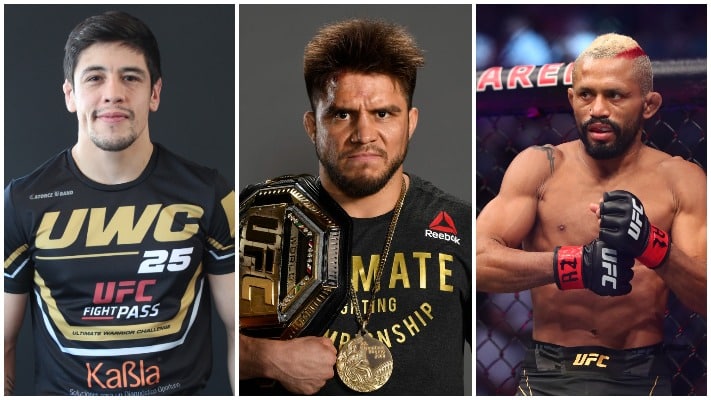 UFC flyweight champion Brandon Moreno has shared his thoughts after it was revealed that rival, Deiveson Figueiredo would be training alongside a former teammate, Henry Cejudo.

Moreno and Figueiredo originally faced off at UFC 256 in December of 2020, which resulted in a draw in a fight of the year candidate. they then met six months at UFC 263 in another exciting bout which ended in Moreno submitting Figueiredo in the third round by way of RNC, winning the flyweight title.

Ahead of their scheduled trilogy bout which is scheduled for UFC 270, Figueiredo announced he would be moving training camps from his home country of Brazil to train with Cejudo in Arizona. In an interview with The Schmo, Figueiredo had this to say about the move “you guys are going to see a new Deiveson Figueiredo. This fights gonna be a war and I am very happy to be here in Arizona with my new family.”

Moreno had previously trained with Cejudo and even spent long periods of time living with Cejudo. In an interview with MMAJunkie, Moreno said this about his time with Cejduo “He helped me some mornings to get my training in, in Arizona, five or six ago. I never had the real opportunity to say thank you. To say, thank you so much, Henry, for helping me in the past”.

The pair eventually split after Moreno’s stint on The Ultimate Fighter season 24. Moreno who was chosen by Joseph Benavidez who was coaching against Henry Cejudo, would go on to stay after the season had finished to train with Benavidez for his fight against Cejudo, which Benavidez would go onto win

In an interview with Carlos Legaspi, Moreno gave his reaction to seeing the pair train together “I was just sad at first. But it was just like the first moments, when I was watching all of these Instagram posts. You know, I don’t care. Right now I understand. Maybe he wants to make some drama in all this history between me and him.”