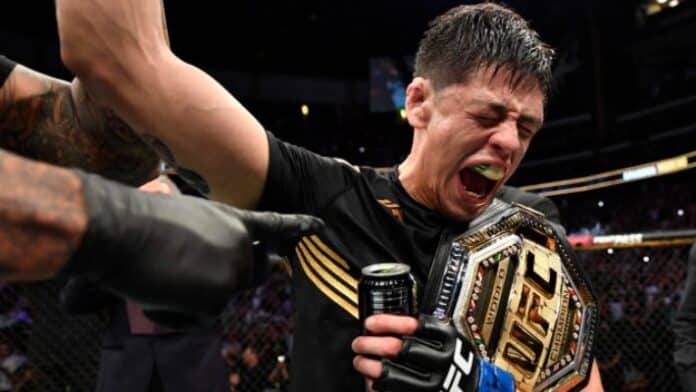 Though fame and success may go to some peoples heads, Brandon Moreno is confident it won’t affect him.

Moreno took the title from Deiveson Figueiredo at UFC 263 after their ‘Fight of the Year’ contender at UFC 256 went to a draw. The lead-up to the rematch featured a fair amount of trash talk from the usually reserved Moreno, as he accused Figueiredo of changing his personality after winning the title. Now that he holds the belt, Moreno is adamant that fans won’t see any change in him (H/T MMA Fighting).

“We can see in the history a lot of guys who get the gold and start to change a little bit and start to be assholes,” Moreno said at the recent media lunch in Los Angeles. “I don’t want to be that guy. I was born in a very humble family that taught me a lot of good stuff in my life. I’m trying to have some fun with the people, too. I love to be champion right now. But I can give you the belt right now.”

The next man to face Moreno has yet to be revealed. Figueiredo has called for a trilogy bout, but ‘The Baby Assassin’ has made it clear that he isn’t interested in giving him another shot.

“It’s obvious Figueiredo wants the next one because he lost the last one,” Moreno said. “But man, the last fight, I dominated him, in the first round, in striking, in grappling, in wrestling, so obviously I’m open to fight again with him. But I think he needs to fight with somebody.”

Askar Askarov would appear to be the next sensible challenger, but he is apparently dealing with an injury that will keep him sidelined for up to six months. With that said, it would appear that the winner of the upcoming fight between Alexandre Pantoja and Brandon Royval could decide the next contender, or Cody Garbrandt could make his divisional debut for the title.

Who do you want to see get the next shot and Brandon Moreno’s title?