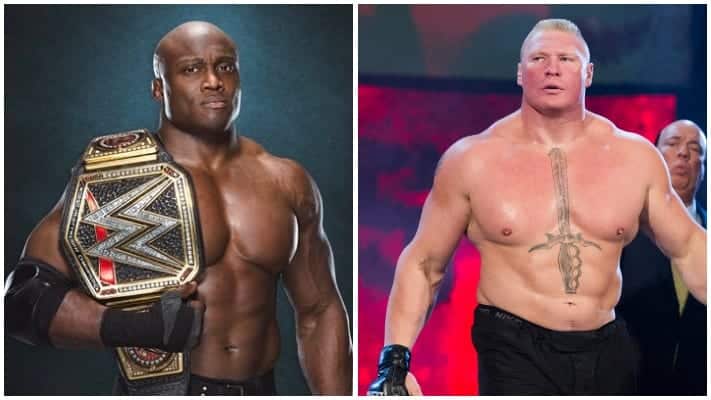 WWE champion Bobby Lashley has revealed he is open to returning to MMA for a fight with former UFC heavyweight titleholder, Brock Lesnar.

Lashley is a former Bellator and Strikeforce heavyweight who amassed an impressive 15-2 record in MMA.

‘The Dominator’ has not fought in MMA since 2016, when he defeated Josh Appelt via rear naked choke submission.

Since then, he has been super active in the WWE.

Lashley’s success culminated in a title match against The Miz.

Lashley dominated his opponent, before swiftly submitting him to win the WWE belt.

Lesnar hasn’t fought in MMA since his controversial win over Mark Hunt at UFC 200 in 2016.

The heavyweight phenom was contracted to the WWE until August 2020 but has not wrestled since then.

In an interview with TMZ Sports, Lashley revealed he is open to fighting Lesnar in MMA or wrestling.

“Well, I’ll tell you this,” Lashley began. “I woke up in the morning, I did my cardio. I ate my breakfast, I’m doing some interviews. I gotta go work out after this and I’m gonna eat lunch. I can only control the things that I can control. I’m willing to fight. I’m willing to wrestle, I’m willing to do a 100-meter dash, I don’t care. I love those big matchups. Brock is one of the biggest things across the sports industry, sports world across the board. So if I can have an opportunity to fight Brock or wrestle Brock or do anything against Brock, I’m 100% in and I will be ready. That’s all I gotta say about that!”

Lashley then sent a message to Lesnar’s long-time manager, Paul Heyman, he said.

“Paul, call me! Before you guys always said that I had nothing or no reason for [Brock] to come after me. Now I do.”

Do you want to see Bobby Lashley vs. Brock Lesnar in MMA?