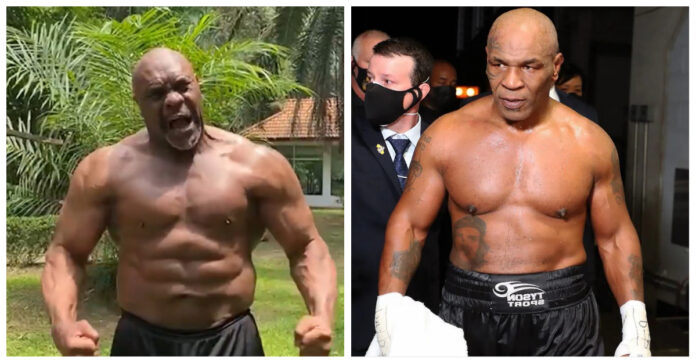 Bob Sapp has gone in on Mike Tyson for not fighting him.

MMA veteran Bob Sapp made his professional debut in 2002 under Pride before moving on to K-1 where he would enjoy a successful brief run. His career spanned 16 years with his final outings coming in 2018.

Although he won his retirement fight against Abdelrahman Shalan in September 2018, ‘The Beast’ dropped 17 of his previous 18 outings with 14 of those losses coming in a row including 15 overall defeats by KO or TKO finishes.

Sapp recently made headlines for a video he uploaded online where he took aim at Mike Tyson. The 48-year-old said that he would rip out the boxing Hall of Famer’s heart in hopes of setting up an exhibition bout.

Bob Sapp says he brought Tyson out of retirement

In an interview with MMAnytt.se, Bob Sapp detailed the origins of his beef with Tyson and talked about the potential showdown claiming he brought Tyson out of retirement.

“We first got involved in 2003 in Las Vegas,” Bob Sapp said. “There was some pushing and shoving when I met him at the Bellagio. I am responsible for bringing him out of retirement. It’s impossible for anyone to be a Mike Tyson fan without them being a Bob Sapp fan, because I’m the guy that brought him out of retirement! Nobody would be talking about him at all if it wasn’t for me!”

‘Iron’ Mike marked his return to boxing in an exhibition bout with the former four-division world champion Roy Jones Jr in November 2020. Sapp alleged that he was the initial opponent who was supposed to fight Tyson and that Jones was found as a replacement to cut him out of the lucrative deal.

Sapp was supposed to be Tyson’s original opponent when he made his anticipated return. Tyson finally ended up fighting former four-division world champion Roy Jones Jr. in November 2020, but according to Sapp, this bout was done to leave him out of the multimillion dollar deal. Sapp partly blames Tyson’s manager and brother-in-law Azheem Spicer but ultimately points a finger at Tyson for being too scared to take the figh

‘The Beast’ claims Mike Tyson is scared of him

Sapp fired shots at Azheem Spicer, Tyson’s manager, and brother-in-law, for giving him the stick but also claimed that Tyson was frightened at the idea of fighting him.

“They decided to draw up some scheme in which they decided to circumvent me because [Tyson] is very scared to fight me,” Sapp said. “I got him from 10 million to 20 million and then the price raised to 50 million, and we ended up selling at 30 million dollars with the PPV that would take it up to 50 million. However, it never worked out because Azheem wanted millions of dollars to go straight to his pocket, and then with Tyson being so scared and all, these price increases came after he saw a picture of what I looked like.

Sapp wants the bout to be in Thailand

‘The Beast’ lives up to his moniker maintaining an impressive physique, especially for his age, and receives plenty of attention for it. Sapp talked further about matching up against the other well-known behemoths in the entertainment industry for a similar showcase.

“Let’s talk about all the pros that have called me out, ones that are scared: Mike Tyson, Thor from Game of Thrones, Shaquille O’Neal, and Evander Holyfield. But we couldn’t understand what [Holyfield] was saying because he is punch drunk and is mumbling all the time. We don’t know if he accepted the offer or denied it because we couldn’t understand what he was saying! It was too dangerous to bring him into the ring because he is too punch drunk!”

Despite the other offers that may be on the table, Sapp is only looking to secure an outing with Tyson. He hinted at a plan to host the potential event in Thailand together with his close friend Samer Suojhayer, CEO of Yuth Sport Gear.

“We have gotten so many offers it is ridiculous. We are discussing how big this is gonna get! Bob Sapp vs Mike Tyson here in Thailand – Let’s go!”