LowKickMMA.com
Home UFC News Bo Nickal targets future fight vs. Khamzat Chimaev: “That could be one... 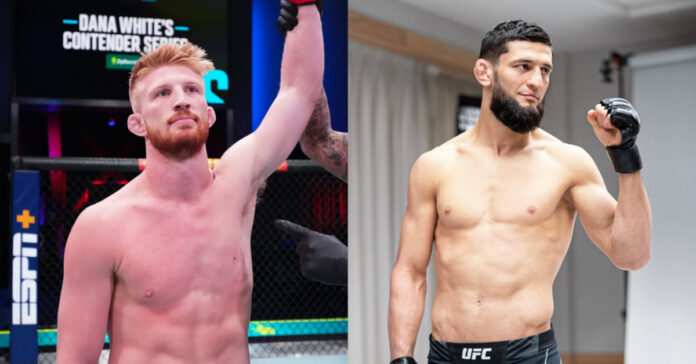 Bo Nickal Is easily one of the most anticipated prospects that the UFC has ever seen. The three-time NCAA national has made quick work of his opponents so far and finds himself with just three professional fights taking on some serious tests in the UFC middleweight division.

Even without an official UFC fight, Nickal is setting his sights high, calling for a fight with Khamzat Chimaev.

Talking to Michael Bisping, Nickal described the Chimaev fight as a ‘good matchup’ and is seemingly not phased by ‘Borz’s past performances.

“Let’s go. I’m Ready,” Nickal began. “I’m ready for him right now, he’s a good matchup for me. He’s not taking me down, he’s not doing nothing to me.“

“I’m 6 foot 1, 205lbs, I’m a full grown ‘85er’, and yeah, that’s a matchup I really really want. I feel like he’s been in MMA longer than me and is a little ahead of me in terms of the organization, but I think without a doubt we have to match up at some point.“

“If he stays undefeated, keeps winning, I think that could be one of the biggest fights in UFC history.”

“He competes really hard,” Nickal said. “He goes hard from the first whistle. He seems a little emotional to me, I don’t really know that he makes the best decision. We saw that in the gilbert burns fight, all of a sudden he’s just slangin’ and bangin’ with this dude for real no reason.“

“When I watch his actual wrestling stuff, he’s basically a 25-year-old man wrestling high school kids in Sweden, there’s not really much to be said about that.”

Who would you like to see Bo Nickal face next?