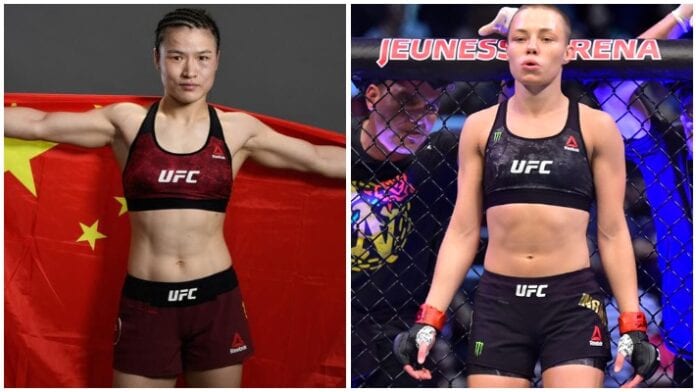 Things have taken a political turn in the Weili Zhang vs. Rose Namajunas fight.

The pair will collide for the women’s strawweight title as one of three championship fights taking place at the upcoming UFC 261 pay-per-view event on April 24 in Jacksonville, Florida.

And while most would have expected a cordial buildup given the personalities and respect between the two fighters, Namajunas has injected some politics into the equation as she is using Zhang’s home country of China — being a communist country — as a source of motivation for their upcoming fight.

“You know, the animosity and things like that, those can be very motivating factors in short moments,” Namajunas said (via @FullContactMTWF). “But in all actuality, going into the fight, maybe there was certain rivalries and things like that, but I always kept myself in control. I never really hated the person and I don’t hate Weili or anything like that. There’s nothing, but I do feel as though I have a lot to fight for in this fight and what she represents.

“I was just kind of reminding myself of my background and everywhere that I come from and my family and everything like that, and I kind of wanted to educate my training partner [on] the Lithuanian struggle and just the history of it all, so we watched ‘The Other Dream Team’ just to kind of get an overall sentiment of what we fight for. Just after watching that, it was just a huge reminder of like, yeah, it’s better dead than red, you know? I don’t think it’s any coincidence that Weili is red. That’s what she represents. It’s nothing personal against her, but that’s a huge motivating factor of why I fight, and I fight for freedom.

“I’ve got the Christ consciousness, I’ve got Lithuanian blood, and I’ve got the American dream. And all of those things I’m taking with me into the fight.”

Namajunas, of course, is Lithuanian-American with her parents being Lithuanian immigrants who left the communist rule of the Soviet Union. That makes her comments understandable but still unnecessary at the same time, especially as Zhang has never publicly advocated for communism.

It will definitely be interesting to hear how Zhang responds to these comments even if they weren’t made with any ill intentions from Namajunas.

What do you make of these comments?