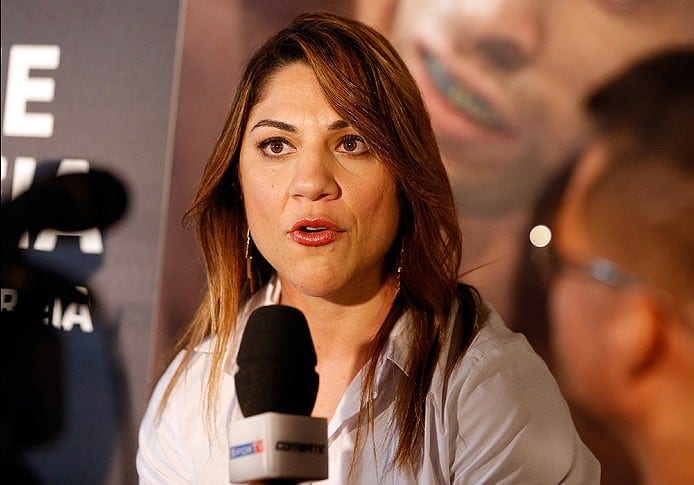 It wasn’t long ago that Brazilian bantamweight banger Bethe Correia was being touted as the most dangerous contender ever to Ronda Rousey’s women’s strap. Then UFC 190 transpired, and we learned that ‘Pitbull’ was just another half-minute girl on the champ’s to-do list. ‘Rowdy’ crushed Correia with a first round barrage of heavy strikes, putting a brutal ending on the challenger’s hopes and dreams.

Another challenger that got some rather rough treatment this week is two-time Rousey opponent and current top contender Miesha Tate. The UFC announced that Holly Holm would get the next crack at the belt on January 2. at UFC 195, contrary to previous reports stating ‘Cupcake’ would be next. Tate said she was ‘extremely disappointed’, but there may be another fight brewing for her in the meantime.

Not known for her quiet or humble nature, Correia took to Twitter to rub salt in Tate’s wounds after the UFC 195 news, check it out:

I bet I'll fight for the title again before you @MieshaTate sorry! UFC has no interest on you ????? @seanshelby @ufc @ufc_brasil

You've won your fights and UFC still has no interest on you. You called me rookie! So come to fight with the "Rookie"@MieshaTate @seanshelby

Ouch, now that has to hurt. It’s likely that the two could be an interesting booking if Tate doesn’t get paired with Amanda Nunes, which has been heavily rumoured since yesterday. ‘Cupcake’ last saw action with a unanimous decision win over Jessica Eye this past July, setting her streak to four (all by decision).

We’ll keep you updated to this feud as it grows, as Tate is surely going to fire some shots back at her new-found Brazilian rival.