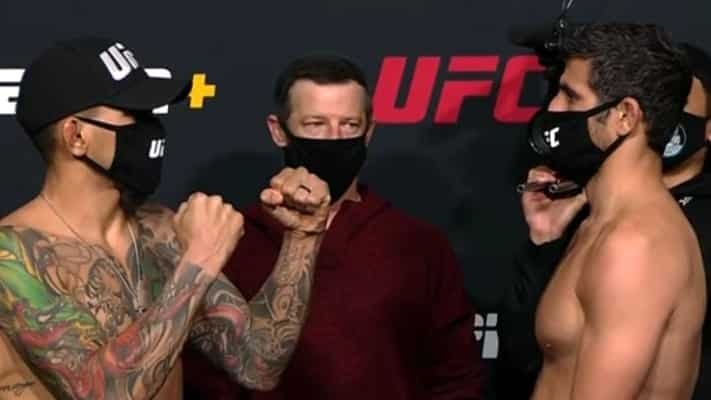 Next up on the UFC Vegas 18 main card is a ranked lightweight bout between Carlos Diego Ferreira and Beneil Dariush.

Round 1: Dariush blocks a high kick from Ferreira. Dariush goes for the single leg but Ferreira scrambles and attempts some submissions. Dariush escapes and goes for another takedown and has Ferreira clinched up against the fence. They separate and start to swing. Dariush lands a body kick. Both start to swing with reckless abandon. Dariush hurts Ferreira with a knee that visibly hurts him as he goes for the takedown. Dariush defends and enters Ferreira’s guard. Dariush gets to his feet as Ferreira tries to take his back but another scramble sees Dariush on top of Ferreira. They eventually separate and return to striking. Ferreira lands a nice right hook that hurts Dariush and follows it with a body kick. Dariush catches Ferreira who responds with a front kick to the face. An action-packed round comes to an end.

Round 2: Ferreira lands a front kick to the body. Both fighters engage again with the striking. Dariush goes for the takedown but Ferreira sprawls and is eventually backed up to the fence. Dariush gets him down soon after and is in his guard as he looks to advance. A scramble sees Ferreira back to his feet but Dariush is controlling him. Ferreira rolls to the ground but Dariush still has control of him as he looks to take his back. Ferreira separates but is taken down by Dariush again. They separate and return to striking but Dariush times another takedown and enters his guard. Dariush is in the half-guard now but Ferreira works so that he’s in full guard. Another round for Dariush.

Round 3: Dariush lands a body kick. Ferreira is more active and looking for a finish. Dariush responds with a leg kick. Ferreira defends a takedown and defends another one soon after as Dariush slips during the attempt.Dariush attempts a leg kick but it accidentally strikes the groin. The fight resumes and Ferreira sees his body kick blocked. Dariush attempts his own before seeing another takedown attempt fail. Dariush lands a big left. However, Ferreira defends another takedown with half the round remaining. Dariush avoids a one two and lands a big left on Ferreira. Dariush slips and Ferreira looks to go on top but Dariush gets to his feet. Dariush eventually gets the takedown he’s been looking for. Dariush looks to take Ferreira’s back but Ferreira reverses but doesn’t have enough time to do anything meaningful.