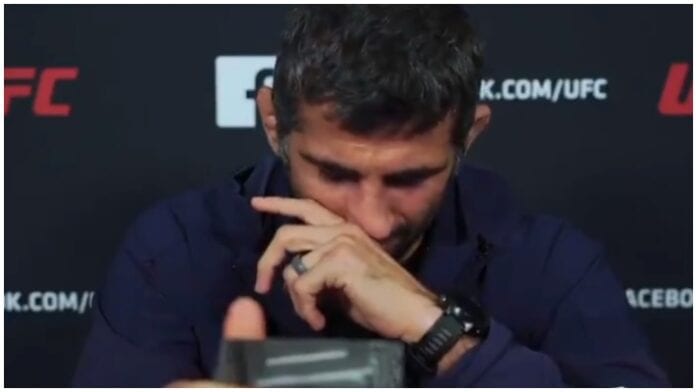 Lightweight contender Beneil Dariush was recently brought to tears after receiving the UFC comeback of the year award for 2020 for his win over Drakkar Klose at UFC 248.

The second-round knockout finish came in an exciting way as it was enough to earn Dariush the comeback of the year fore the UFC.

“Comeback of the year for 2020…” Dariush read. “So… I’m gonna need a second. For this fight… We thought we were pregnant, and I hurt my knee. I had a torn MCL. It was two weeks before the fight. Everybody was telling me, ‘Hey, just think about it, be smart. Maybe it’s not meant to be this time.’ And all I could think about was my baby. That’s why this came the way it did.

“The game plan for the fight was takedown, control, and just go like that. But somewhere along the way, I had to change gameplans when I started getting hit and got hurt. I think the thing that carried me through was knowing I could provide for my baby so I’m gonna think of that every time I see this.” (Transcribed by BJPENN.com)

While Dariush sits at an impressive 19-4-1 and is one of the best grapplers in the sport, he has certainly showed he can mix it up with some of the best strikers as well, showing his skills in the win over Klose and a massive victory over James Vick.

Dariush will ride a five-fight unbeaten streak heading into UFC Vegas 18 this Saturday for his rematch with Carlos Diego Ferreira. Of those five wins, Dariush has three of which earned him Performance of the Night bonuses. It will be great to see the very impressive Dariush this weekend as he looks to put his stamp on the Lightweight division.

Do you agree with Beneil Dariush getting 2020’s Comeback Of The Year Award?