LowKickMMA.com
Home UFC News Ben Askren doesn’t believe Nate Diaz has much of a chance against... 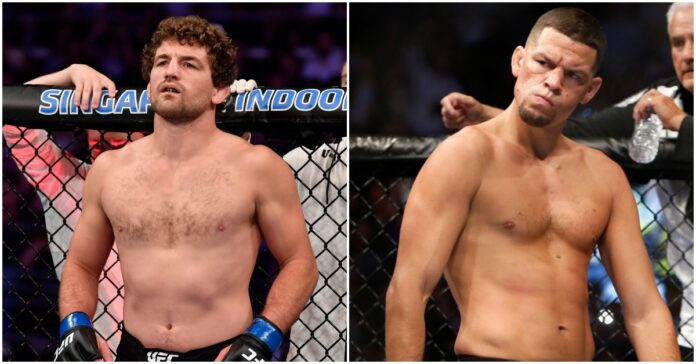 Paul has impressed many combat sport enthusiasts, as he has gone undefeated in his short career as a professional boxer. Paul impressed once again with his unanimous decision win over Anderson Silva in his last match. He was able to hit Silva with heavy shots, even knocking him down in the last round. Silva also admitted that everyone should respect what Paul is doing, as he is putting his all into training.

Diaz and Paul’s camps went at it at Paul’s last event, as the two threw water bottles at each other and got into physical altercation to go along with it. Diaz is currently a free agent after his last fight with Tony Ferguson. He won that fight via submission and although he is a free agent, he kept the door open for a potential UFC comeback. Diaz would still like to finish off his trilogy with Conor McGregor, as the two have been promising the fans and media that they will settle their rivalry.

“There’s a chance. I mean I don’t know why anyone would think that Nate has much of a chance given what just happened,” Askren, the former ONE and Bellator welterweight champion, told Submission Radio in a recent interview. “Nate’s a lot smaller. I don’t think anyone would consider Nate on the level of striker that Anderson is, but yeah I guess it might happen.” (transcribed by Bloodyelbow)

Paul now has a boxing record of 6-0, with wins over two former UFC champions. He beat Tyron Woodley twice, Nate Robinson, Silva, Askren, and a YouTuber by the name of AnEsonGib.