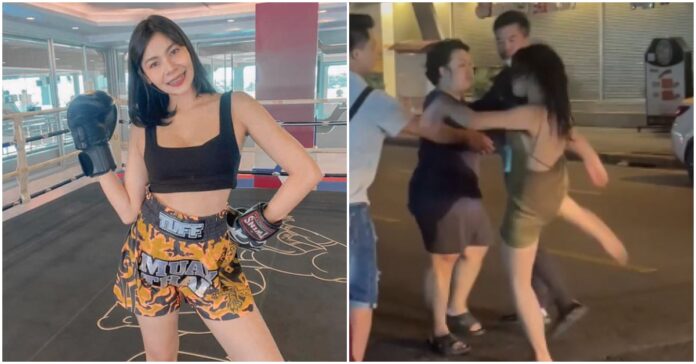 A night out turned into a night of regret as one Thai man poured beer on the wrong woman; a Muay Thai fighter named Pareploy Saeaia.

According to Saeaia and eyewitnesses, Saeaia and her friends were enjoying a night out at dinner at a restaurant in the Huai Kwang district of Bangkok, TH. This was until a man walked up to her and offered to buy her a drink.

When Saeaia declined and shooed the man away, the man responded by pouring a beer over her head. As the man walked away, hostilities ensued between the man’s friends and Saeaia’s friends.

But unbeknownst to the unidentified man, Saeaia didn’t need any help. She then confronted the man and began throwing leg kicks and punches at him in the middle of a nearby street. The man didn’t apologize nor did he throw any strikes back at Saeaia as the chaos ensued.

Check out a video of the incident below.

“If this happens to other women, they might choose not to respond. The guy’s choosing the wrong person because I’m a boxer,” Saeaia said in a social media post. (h/t Bangkok Post)

Following the incident, Saeaia filed a complaint against the man with the Huai Kwang police. There’s no word on any further legal action being taken, although the two of them paid a small fine at a local police station.

Pareploy Saeaia recently gave an interview to Thai PBS regarding the incident. During the conversation, she claimed to have won 40 out of her 50 matches during her time as a boxer. The 24-year-old began practicing Muay Thai at 13 but is now retired from fighting and instead spends her time training people who are interested in the Thai martial art.

What do you make of this clip? Did you enjoy seeing this female Muay Thai fighter teach a belligerent drunk a lesson?