LowKickMMA.com
Home ONE Championship News ONE: No Surrender: Full Results 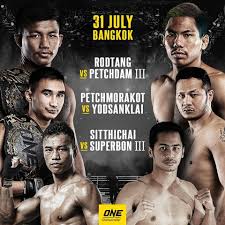 ONE Championship returns today (Fri. July 31) with ONE: No Surrender going down in Bangkok, Thailand. Due to travel restrictions, the six-bout card features 4 ONE Super Series bouts and two MMA contests and is made up of only fighters based in Thailand. Thankfully this has forced the matchmakers to pair some of the world’s top strikers against one another, and the four Super Series fights are all dynamite.

In the main-event, Rodtang Jitmuangnon puts his flyweight Muay Thai title on the line against Petchdam Petchyindee Academy. Rodtang has been an absolute wrecking ball since arriving at ONE, and Petchdam will need all his agility to stay out of Rodtang’s range if he wants to pick him apart with his lethal kicking game.