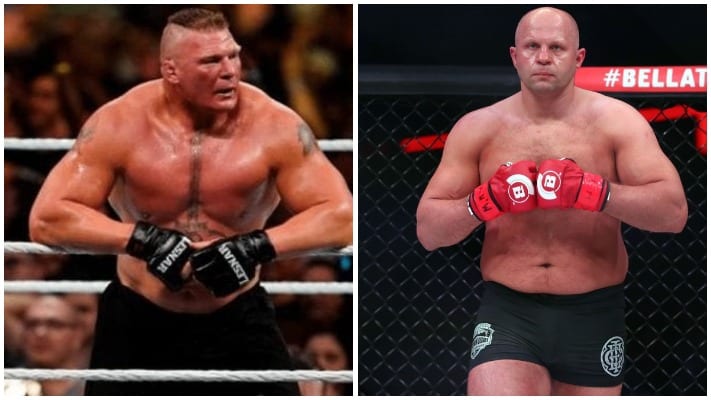 Bellator president Scott Coker has expressed an interest in signing Brock Lesnar who is currently a free agent after opting against re-signing with the WWE. Coker is hoping to match Lesnar against heavyweight great Fedor Emelianenko who is currently on his retirement tour.

News about Lesnar becoming a free agent broke late last night and it has excited fans, fighters and promoters who all seem to want a piece of the superstar. Jon Jones has already called for his heavyweight debut to come against the 43-year-old.

According to Ariel Helwani Bellator are interested in signing Lesnar. The veteran MMA reporter made public his conversation with the promotions president Coker, he wrote.

“Asked Bellator President Scott Coker if he has interest in Brock Lesnar, and he replied: “Yes, if he’s truly available. Fedor vs. Brock is interesting. It’s the fight that never happened!””

Lesnar hasn’t fought since picking up a win against Mark Hunt at UFC 200 in July of 2016. Post-fight the eight-time WWE world champion failed a drug test. His win over Hunt was overturned to a no-contest and he was slapped with a $250,000 fine as well as a one-year retroactive suspension from active competition.

The former UFC heavyweight champion is currently 5-3 with one no-contest in MMA. Lesnar picked up UFC gold in just his won the UFC belt in just his fourth professional fight when he fight legend Randy Couture by knockout. He made two successful defences of his heavyweight strap against Frank Mir and Shane Carwin before losing his belt to Cain Velasquez and suffering another defeat at the hands of Alistair Overeem.

Emelianenko was last saw in action when he took out Quinton ‘Rampage’ Jackson who made his heavyweight debut at Bellator 237 in December 2019. Prior to that Fedor lost his belt to Ryan Bader in the Bellator heavyweight grand prix final.

Do you want to see Bellator match Brock Lesnar against Fedor Emelianenko?