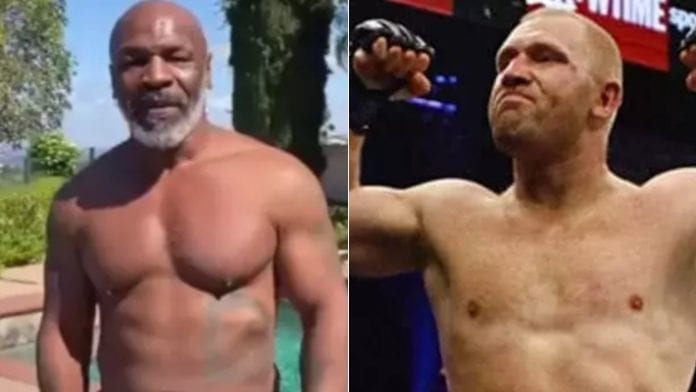 Bellator heavyweight Sergei Kharitonov believes Mike Tyson‘s current shape at the age of 53 is a result of steroids.

Tyson made headlines recently when footage of him hitting the pads went viral. Along with him being in top shape again, it sparked rumors of a comeback which Tyson would confirm himself as he looks to return to action for a charity match.

He has since received a number of offers and callouts and Kharitonov is among many who would be open to potentially facing the boxing legend. But when it comes to Tyson’s shape, Kharitonov believes there’s no other explanation other than him being juiced up.

Not that he’s against it, however.

“He’s juiced up, but it’s fine. There won’t be any doping-control,” Kharitonov said in a recent interview (via RT). “He’s taken testosterone, and some kind of health products. There’s no resentment towards Tyson here for that. He’s 53 years old.

“How else could he have got into more or less top shape? Only on steroids, there’s no other option.”

Kharitonov is even more convinced based on his own experiences of taking performance enhancing drugs when he was in the army.

“Have I ever taken supplements? In the army yes. When everybody tried all different tablets,” he added. “In my third or fourth year, when everybody weight trained, my friends brought nandrolone. I injected myself, to look good, to have a good body. I remember my muscles were like rocks.

“I looked in the mirror and realized it wasn’t for me. I stopped dabbling in that and don’t intend to. First, it’s bad for you. Secondly it’s illegal [in sport].”

Do you agree with Kharitonov’s assessment?