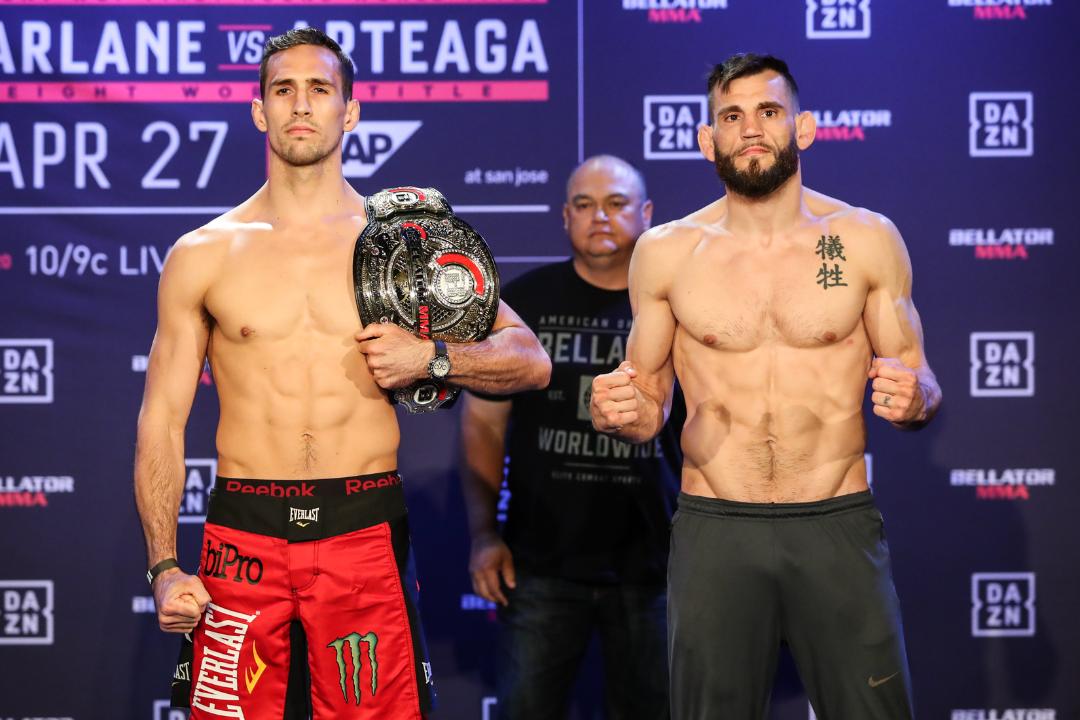 Bellator 220 results are underway as the Viacom promotion holds this latest event on television for fight fans around the world to watch the show.

It’s once again fight day here at LowKickMMA, and the talent on display tonight (Saturday, April 27, 2019) will come in the form of Bellator 220. Headlining the card are Rory MacDonald and Jon Fitch, but there’s a whole bunch of great fights also taking place on the rest of the main card.

Rory MacDonald and Jon Fitch meet in the main event for the welterweight title and first-round welterweight grand prix. In round 1, Fitch was looking for the takedown but MacDonald stuffed it and went for a kimura but Fitch slipped out. Fitch finally took him down and worked him over with strikes from full guard. In round 2, Fitch continued to look for the takedown while MacDonald did a nice job with stuffing them. MacDonald managed to score a late round takedown. In round 3, Fitch scored an early takedown and started the beatdown with strikes and elbows that sliced open MacDonald on his right temple. In round 4, Fitch failed on a takedown attempt and MacDonald landed some big hammer fists. Eventually, Fight got the takedown and rained down strikes to end the round. In round 5, Fitch scored yet another takedown to continue the beating. MacDonald was bleeding pretty good at this point. Fitch continued his dominance. It was ruled a majority draw by the judges. Thus, MacDonald retains the title and advances in the tournament.

Ilima-Lei Macfarlane and Veta Arteaga meet in the co-main event for the women’s flyweight title. In round 1, Macfarlane took her down and worked for a heel hook but couldn’t get it. Veta scrambled out and landed some good shots from top position. In round 2, Veta started pressing forward and busted up the champ pretty good with jabs to the point that she was bleeding from her nose. This came after  Macfarlane took her down and was in guard as Veta connected with an elbow strike to her face. In round 3, Macfarlane was able to score a takedown and get guard where she landed some big strikes. Macfarlane sliced her open with a nasty cut on her forehead that made the doctors check her but the fight was stopped. Macfarlane retains.

Benson Henderson vs. Adam Piccolotti  is next in a lightweight bout. In round 1, Adam took him down and got his back where he was looking for a rear-naked choke. Henderson got back to his feet and started to land some big shots while working some nasty leg kicks. In round 2, Henderson controlled the pace of the fight and a large reason for that is due to him landing a big takedown that saw him land some big strikes and control Adam. In round 3, Adam worked for submissions the entire round while Henderson did a good job of defending and sprawling. Benson even had a guillotine choke attempt at one point. Henderson spun out of a rear-naked choke under the last minute and rained down strikes. The judges gave the win to Henderson.

Phil Davis vs. Liam McGeary  is next in a light heavyweight bout. In round 1, McGeary rocked him with a nice strike up the pipe. McGeary was also doing a nice job of landing jobs while Davis was trying to find his range. In round 2, Davis was working over the lead leg of McGeary. Davis briefly clinched with him and landed some nice knee strikes to the gut. Liam started to push the pace and go after Davis with his own leg kicks. In round 3, Davis took him down and landed a series of elbow strikes. Liam got back to his feet. Davis stunned him then got back mount and smashed him strikes then went for a rear-naked choke but Liam tapped.

Opening the main card on DAZN is Gaston Bolanos vs. Nathan Stolen in a featherweight bout. In round 1, after a brief time on the ground, Bolanos dropped him with a left hook and then finished him on the ground with strikes.

Aviv Gozali def. Travis Crain via submission (rear-naked choke) at 2:15 of round one.

Matt Perez def. Justin Tenedora via KO (punches) at 4:52 of round one.

Cass Bell def. Peter Ishiguro via KO (punches) at of 2:59 round two.

Chuck Campbell def. Bruno Casillas via KO (knee) 1:45 of round one.

Hyder Amil def. Paradise Vaovasa via submission (rear-naked choke) 2:34 of round one.

Jordan Williams def. Diego Herzog via TKO (punches) at 1:21 of round three.

Abraham Vaesau def. Justin Roswell via TKO (punches) at 1:59 of round one.