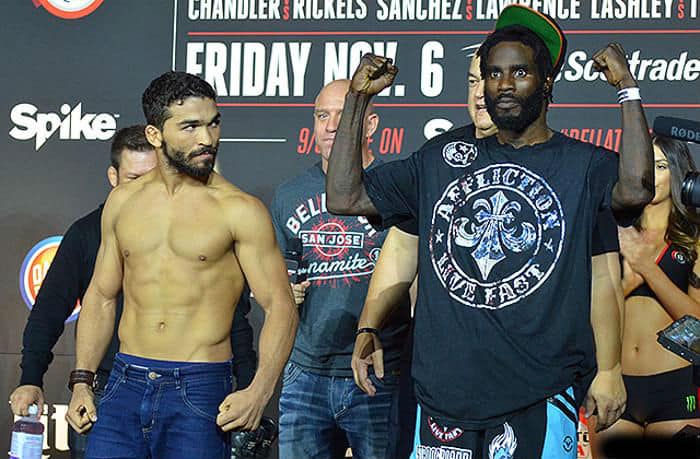 Patricio Freire and Daniel Straus met in the main event for the featherweight title. Straus dominated the fight in the first three rounds and had Freire hurt for all three of them, but couldn’t finish it. In the fourth, it appeared that he hurt his left hand and things went downhill for him from there. Freire tried to make a comeback but ran out of time. The judges

Will Brooks and Marcin Held met in the co-main event for the lightweight title at Bellator 145. Held had Brooks in trouble in the first round with a leg submission attempt, but Brooks got out of danger and changed the fight going forward. Brooks would dominate the next four rounds with ground and pound to earn a unanimous decision victory.

Michael Chandler and David Rickels meet in a key lightweight bout on this card. Chandler was on a mission in this fight as he dominated the first round and would do some major damage in the second. Chander busted Rickels open, which resulted in a blood bath. Chandler finished him in the second round via TKO.

Bobby Lashley and James Thompson meet in a key heavyweight bout on this card. This fight did not last long as Lashley took him with within the first 15 seconds of the fight then finished him off with strikes.

Opening the main card on Spike TV was Emmanuel Sanchez vs. Justin Lawrence in a featherweight bout. Both men had their moments in this fight and was very close. So close that the judges gave Sanchez a split decision victory. The fight featured striking, clinch work, and ground and pound. A very well-rounded bout to say the least.

So join us right here at LowKickMMA for Bellator 145, kicking off at 7:00 PM ET!

Bellator MMA | With A Vengeance – Live Friday 9/8c on Spike

Here are the results for the preliminary bouts: