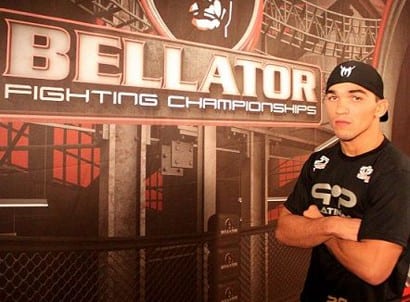 Tonight (Fri., September 5, 2014) Bellator 123 took place at the Mohegan Sun Arena in Uncasville, Connecticut. The season debut was the first under new President Scott Coker, and the card featured a main event rematch between Pat Curran and Patricio “Pitbull” Freire for the Bellator featherweight strap.

The fight began with Freire winging some big shots, landing hard. Curran persevered and the action slowed to boos from the crowd. “Pitbull” got a sloppy takedown but ate some knees when Curran got back up. Freire landed a solid right towards the end of the first.

Curran showed a bit more pressure to start the second. Freire appeared to be landing more until Curran landed a combo of his own. “Pitbull” unleashed some big shots that wobbled Curran, who went for a takedown. Curran went to work with some huge knees and elbows as the more exciting second round ended.

Freire landed some hard low kicks in the third. Curran worked the jab, but “Pitbull” dropped him with a left hook. Freire landed on top in a scramble, but Curran fought through adversity. “Pitbull” was landing at will but couldn’t keep the champ down.

In the championship rounds, Freire was throwing with more power, snapping his stiff jab and more low kicks. He secured a couple takedowns, while Curran kept implementing his uppercut and jab. It was an awesome fight, and in the end, Curran was atough champion, but Freire took home the unanimous decision and the belt by landing more significant shots.

Before the main event, former UFC light heavyweight champion Tito Ortiz had a heated “staredown” with fellow UFC vet Stephan Bonnar that seemed scripted and ended in a short shoving match a la “Rampage” vs. “King Mo.” Perhaps Bellator is looking to cash in on the Jon Jones vs. Daniel Cormier hype.

The two will fight on an upcoming Bellator card on November 15, 2014. Check out a video of the “brawl” courtesy of TAP NAP SNAP below:

Former Strikeforce light heavyweight champion and Bellator title challenger Muhammed Lawal faced off with Dustin Jacoby in the co-main event. Not surprisingly, “King Mo” used his wrestling to win a relatively uneventful opening round. The fighters traded shots in the second, and Lawal landed some huge bombs. Jacoby was a game opponent, but he was dropped and finished by a barrage of ground and pound shots from Lawal.

Tamdan McCrory scored an amazing knockout of hometown fan favorite Brennan Ward at welterweight, using a furious flurry of punches to instantly earn the walk-off victory in a mere 21 seconds. Check out the GIF of McCrory’s impressive win courtesy of Zombie Prophet:

Former Strikeforce competitor and WWE champion Bobby Lashley made his Bellator debut, using his wrestling skills to dominate Josh Burns before putting him away with a second round rear naked choke. 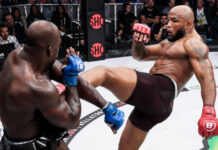 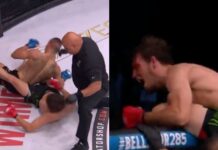