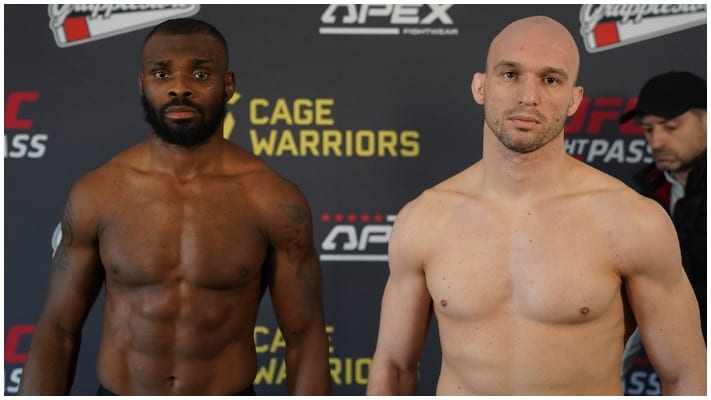 Round 1: Bartosz Fabinski comes running at his opponent Darren Stewart. The pair begin to grapple and exchange positions against the cage. After almost spending half the round against the cage Marc Goddard finally steps in and separates the two fighters. Fabinski runs straight back in for a takedown and gets it. Stewart immediately fires off a huge elbow which cuts his opponent badly. The blood-soaked Pole maintains top position and eventually works to the back of Stewart. He’s firing in elbows but Stewart uses the cage to get back up. He jumps for a guillotine and is squeezing hard before the horn sounds to end round one.

Round 2: Fabinski again comes out hard. This time he opens up with a spinning back fist before securing the takedown. ‘The Dentist’ grabs for the choke but he hasn’t got it – but he’s not letting go of Fabinski’s head as he moves into side control. The Polish fighter eventually postures up throws a few elbows before Stewart regains full-guard. The clock is ticking down and Stewart can not get back up. Fabinski is happy to sit in guard and continue to throw short shots whilst maintaining top position. The referee again asks for more action which prompts Fabinski to start unleash shots with his opponent trapped against the fence.

Round 3: Fabinski looks visibly tired as he begins this third round. His first takedown attempt gets easily shrugged. Stewart surprisingly goes for his own takedown and secures it. He lets a few shots go but Fabinski quickly jumps back to his feet before securing his own takedown and continuing the work he started in rounds one and two. The Englishman is trying desperately to get back to his feet but as soon as he does he’s dragged back down the mat. Again, he’s back up to his knees but back down he goes again – he looks so frustrated. He won’t give up though, he stands up again but Fabinski lifts him up high and slams him to the ground. Stewart resorts to slapping Fabinski from the bottom as the clock ticks down and the fight ends.