LowKickMMA.com
Home Combat Axe Kick – Everything You Need To Know 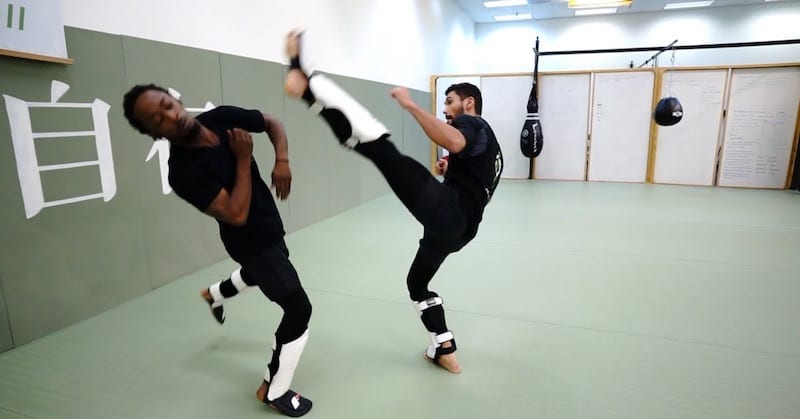 Most combat sports fans can count the number of times they’ve seen an axe kick on two hands. You don’t see it very often, but when you do you definitely will remember it. The axe kick is a highly underutilized strike that can be devastating once it lands.

As you see a fighter’s heel come crashing down on their opponent you shout ooohhh along with the crowd. Not many use this strike, but those that do can throw it with deadly accuracy.

It’s a great kick that is highly effective and we’re going to break down everything about the axe kick. Everything from when it was created, the mechanics of the strike, and detail the ways to throw this kick.

When was the axe kick created?

Every technique in kyokushin karate is done with force in order to hurt or KO your opponent. The axe kick or hammer kick was developed within the competitive sparring matches.

In a kyokushin competition, both fighters stand toe to toe delivering hard strikes. Punches to the body and kicks allowed everywhere, accept the groin.

Since both fighters were standing toe to toe, the axe kick was created as a way to bypass normal defenses. Use a fake to loop your leg around and up over the opponent’s guards. Giving you an opening to throw a vicious axe kick.

It isn’t a technique you’d throw in high volume, but when you do it is done with force.

One of the most famous axe kickers of all time was kickboxing and karate world champion Andy Hug. Andy was a Swiss kickboxer that won numerous champions within kyokushin karate before switching over to kickboxing.

The blue eyed samurai made the axe kick famous knocking out numerous opponent’s with it. Whenever someone teaches the axe kick now, they most always mention Andy Hug.

How does an axe kick work?

An axe kick is very different from most every other type of kick created. Where most kicks are chambered and hit the target when your leg is bent at an angle.

This is not so with an axe. When you throw and land an axe kick, your leg is straight.

Setting it up is also a bit of misdirection and shifting your weight to each hip. As you move into a direction your weight shifts to the other leg.

You lift your kicking leg up and move it into a circular motion, which serves two purposes. One to get momentum to bring your leg straight up and the other is misdirection to confuse your opponent.

Now with your leg straight up, you use the power of gravity dropping your heel straight down on your opponent. Delivering a devastating blow that they won’t see coming.

The first technique we’ll detail is the clockwise axe kick. Both legs can be used for this kick, so it’ll be your preference. Although this technique is more efficient and powerful when using your back leg.

You start the technique by taking your initial step or slide in to get in position for the kick. With traditional kicks you start by bringing your knee up, but axe kicks break this common rule

Your leg is going to stay straight and swing clockwise towards the opponent’s right side.

This swinging motion gains momentum for your kick, while also serving as a misdirection to trick your opponent.

Remember to use your heel which is the hardest part of your foot and look to target two areas. Either the opponent’s head or their collar bone.

You target the head with the into to KO them and target their collarbone to damage or break the bone.

This kick has the same steps as the other type of axe kick just in the other direction. Move towards your right and swing the leg of your around the opponent bringin it up over their head.

From there smash your heel down onto your unsuspecting opponent.

There are a variety of different setups and combos you can do with the axe kick. You can set it up by throwing punches to get in or use your kicks.

Throwing punches first is a good idea, because you can easily hide your axe kick behind them.  A simple 1-2 punch following up with your axe kick is a simple and basic set up.

As you prod your opponent’s with jabs and straight, their defenses immediately go to block punches. When you throw your 1-2 don’t look to land your 2 and use more as a way to block their vision. With their vision blocked, you have a wide opening to land your axe kick.

For setting up an axe kick with a kick using a roundhouse is probably the simplest method. If you continually target the opponent’s lead leg with a right roundhouse kick, they will start defending it. Once they go to check your kick all you have to do is fake and circle you leg around for the axe kick.

After landing/missing an axe kick

One precaution you need to take is landing in your stance after you throw your axe kick. Whether you landed or missed it, you have to bring your leg back down with control.

If you bring your foot down full force back into your stance you will definitely injure your foot. At worst break your heel, so always remember to bring your foot back down with control.

A hatchet kick is a mix of a hook kick and an axe kick all in one. The ankle you throw it at is just in between these two types of kicks.

The initial step is just like the axe kick, where you slide up to set up your kick. Bringing your knee up and leaning back just a little to keep your balance steady.

You swing it up and stop it at 45 degrees and drop it down on your opponent at an angle. This kick works great when the opponent is using outward guards leaving you the opening for the hatchet kick.

Tips for doing the axe kick

The axe kick isn’t a move you should throw often. Just when there’s an opening and once you see it, you have to go all in and throw it. Here are some tips for executing an axe kick.