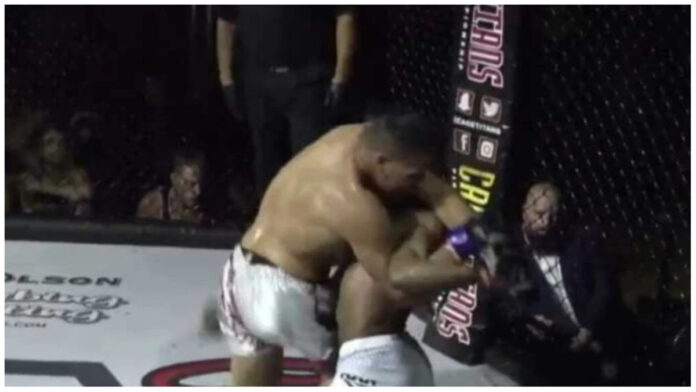 Things got vicious at Cage Titans 55 when one amateur MMA fighter got his arm snapped almost instantly by a devastating keylock submission by Kyle Pavao.

Typically joint-lock submissions result in a tap, but in rare occurrences a tap doesn’t come in time, and the phrase “Tap or snap” truly comes into play. At Cage Titans 55 this would be the case for one very unfortunate fighter, as Pavao’s keylock would be too swift for Wayne Downer.

As seen in the video, Downer is in bottom side control, and uses his feet to attempt to transition back to his feet. Kyle Pavao, however, seemed prepared. Already fishing for the keylock, the sporadic scramble created the perfect opportunity for him to sink it in. A tap should’ve been imminent, but both fighters were still in motion, and you can see how momentum comes into play to aid in the submission attempt.

Without hesitation, Pavao continues to crank and the result is inevitable: a grusome snap. After the damage is done, Kyle Pavao can be seen celebrating his victory, attempting to check on his opponent but stopped short by a ringside official.

Check out the official results of Cage Titans 55 below!