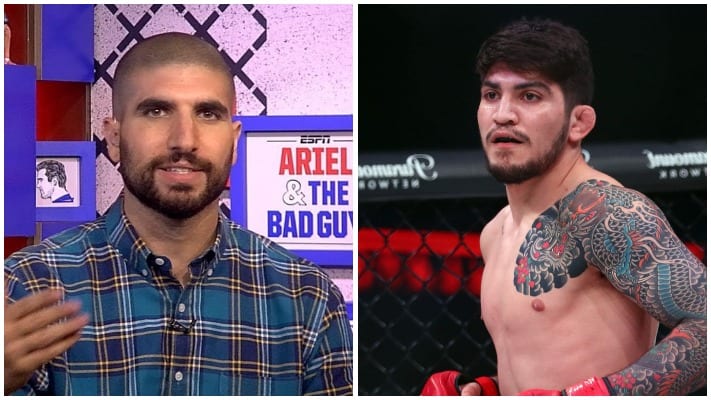 Ariel Helwani embraced his “Heelwani” side even more on Saturday by ending Dillon Danis on social media.

Danis mocked Helwani and called him a b*tch after the veteran MMA reporter showed support for Jake Paul and his challenge to UFC president Dana White.

That led to Helwani not holding back whatsoever as he proceeded to roast Danis.

“Guys if you think life sucks right now just think you could have begged for 3 years to fight an 0-0 YouTuber and 3 years later still not be popular enough or good enough to even be considered a worthy opponent for him. Imagine that. In other words, you could be @dillondanis.

Helwani also poked fun at the fact that Danis said he would retire if Paul was ever able to sleep him like he did to Tyron Woodley. Danis, however, hasn’t competed in combat sports since June 2019.

“‘Hey guys if I lose to Jake I’ll retire.’ Retire from what? Social media? You already don’t fight.

“3…2…1 before ol DD texts me hey bro why don’t you like me? Like, I thought we were cool bro Can’t wait for the witty tweet reply, too. And then he’ll call for a truce and then ask me to RT his tweets every two seconds. What a pleasure.”

Helwani ended things by hoping Danis gets what he wants.

“Anyway. Maybe this will be the year he accepts your challenge Dillon!! I personally hope he does so you can leave us the f alone with your stupid tweets and lame social media skilllz Save us, @ScottCoker. The begging is unbecoming. Please. For the love of God save us.”

Ariel Helwani Comes Out On Top

Danis — who deleted the initial tweet calling Helwani a b*tch — has not responded as of yet and it’s hard to see how he does so without looking bad.

All in all, this looks like a win for Helwani.

What did you think of the roasting by Ariel Helwani?