LowKickMMA.com
Home UFC News Anthony Smith Would Still Love To ‘Slap The Sh*t’ Out Of Luke... 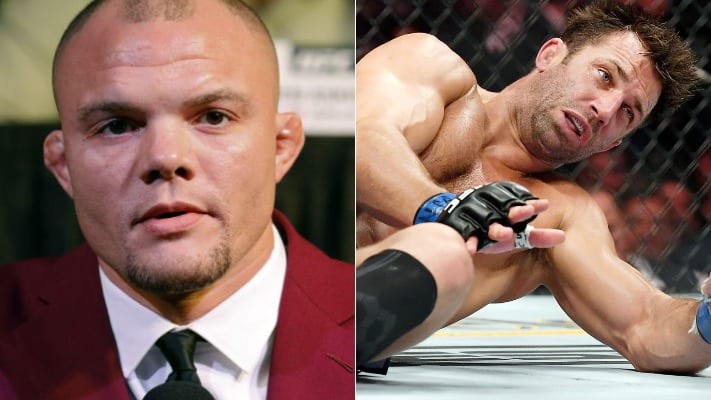 It’s no secret that Anthony Smith and Luke Rockhold despise each other. So imagine the satisfaction “Lionheart” felt seeing Rockhold get knocked out by Jan Blachowicz at UFC 239 this past weekend (Sat. July 6, 2019).

The former middleweight champion took on Blachowicz in his debut at 205 pounds. Heading into the bout, Rockhold seemed very confident he would dominate his way to a championship bout against Jon Jones. However, Rockhold was stunned early in round one, and his Polish adversary was able to finish him off in the second round in devastating fashion.

Smith was recently interviewed by Submission Radio to get his thoughts on Rockhold’s loss. Despite Rockhold suffering a loss, furthering himself from Smith in the rankings and lessening any chance of them fighting next, “Lionheart” admits he’d still like to “slap the sh*t” out of the Californian:

“You talk shit, you get hit, and that’s how it goes. But I’m also an adult, so I understand that that’s not exactly how things go all the time. But I would have loved to have been the one to do that to him. On the flipside, it’s kind of a ‘serves you right bitch’ moment. Talk all that shit. You couldn’t beg your way into a fight with me right now. You know, coming off a win, even then the UFC didn’t like it.

“I was already waiting for that fight, and as soon as Rockhold got that win, we were gonna go into those negotiations and figure out where and when, and the UFC didn’t even like it. They didn’t like the fact that I was gonna fight a guy that wasn’t even ranked and may or may not be coming off a win over Błachowicz in his first fight. UFC didn’t even like that shit.

“My family didn’t like it, my manager didn’t like it. I just wanted it. Sometimes you just gotta do something you really want to do, not that you have to do. And sometimes it doesn’t always have to make sense. So, it would have been nice to fight him, but at the same time, I know he’s sitting at home feeling really god damn stupid. At least as far as when it comes to him and I, I know he feels really stupid and he regrets saying all that shit.”

It remains to be seen what’s next for Rockhold. UFC President Dana White suggests the former 185-pound champ should consider retirement. As for Smith, he comes off a submission victory over Alexander Gustafsson, and is likely one more big win away from a title shot.

What do you think about the beef between Smith and Rockhold?