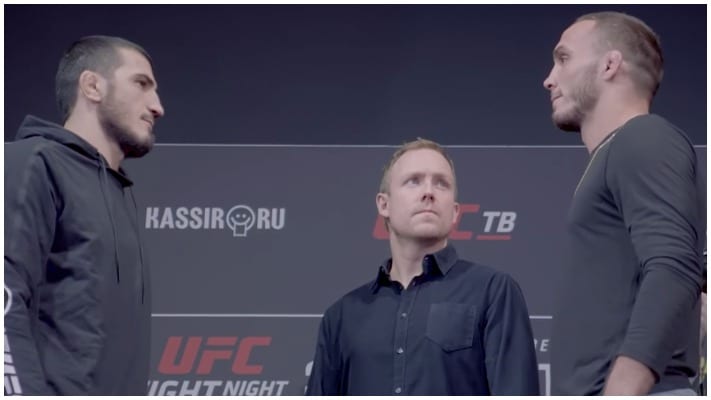 Round 1: Martin is pumped up and super aggressive to start the fight. Emeev is countering well though. Martin lands a nice one-two. Martin is doing a lot of trash talking. He drops Emeev with a leg kick. Emeev attempts a takedown but Martin counters with a kimura lock. Emeev is doing a good job locking his hands and gets out of it. The fight is stopped after an accidental groin shot on Martin. Emeev attempts a takedown but it’s stuffed. They clinch up as the round comes to an end.

Round 2: Lots of jabbing by both fighters. Emeev misses a wild overhand right and Martin responds with a hard leg kick. Emeev’s left calf seems to be swelling up. Emeev attempts another takedown and Martin counters with a guillotine attempt. However, Emeev gets out and has Martin against the cage. They separate. Emeev tries another takedown attempt but it’s stuffed. Emeev lands heavy on Martin which draws a reaction from the crowd. They’re striking a bit more now. Martin’s nose is bloodied up. The round ends on the ground after Martin takes Emeev down and attempts a submission.