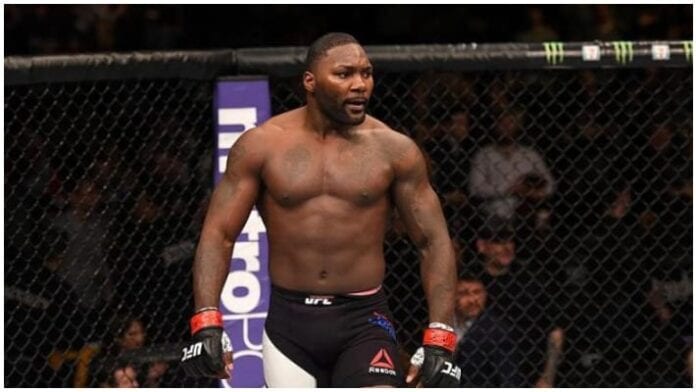 Don’t expect Anthony Johnson to compete at heavyweight in the near future.

When Johnson initially signaled his intentions to come out of retirement, he was expected to compete at heavyweight. That’s because “Rumble” hinted at the possibility while he had also bulked up considerably since retiring from the sport in 2017. It seemed to be the natural option.

However, Johnson has since shed the excess weight and is now looking trim ahead of his planned Bellator debut where he will compete at light heavyweight.

And for now, he has no plans on competing at heavyweight.

“Everybody keeps talking about heavyweight cause I brought it up but everybody also has to realize I was fat whenever I was talking about fighting at heavyweight,” Johnson told MMA Fighting. “I was fat. So I didn’t have no dreams of weighing 230 [pounds] or less again. But you’ve got monsters at heavyweight.”

One more reason Johnson doesn’t want to compete at heavyweight is because his teammate Linton Vassell competes in that division at Bellator.

That and the fact that he already has to deal with similarly tough fighters like Vassell at 205 pounds.

“You’ve got my guy Linton Vassell, he’s my training partner and I don’t even want to fight this guy,” Johnson said. “I hate sparring him. He’s a ball of muscle and he’s tall and lanky and just he’s tough. I don’t want to have to deal with that. I already have to deal with it with the smaller guys. Why would I want to deal with it with somebody that’s bigger than me? Linton walks around the gym with his shirt off and on his fat days, he looks better than 99 percent of the rest of the world.

“I’m like I don’t want to deal with those problems. Cause when he grabs you, you’re not getting away. I just don’t want him to touch me.”

As for the light heavyweight division, there are many potential matchups for Johnson. The most intriguing one is with fellow Bellator signing Yoel Romero but nothing is confirmed for now.

Johnson is happy to fight anyone as he feels the hype of his eventual return.

“The hype is real. The hype is dope,” Johnson added. “Fans are hitting me up left and right. Family is hitting me up left and right. My hometown is going crazy, they’re talking and contacting me. It’s a beautiful thing to be appreciate for what you worked hard for, that’s for sure. I try not to let the hype get to me. I just believe in myself and I know what I can do and I’ve proven what I can do.

“For me, I think my excitement comes when I’m actually really about to whoop somebody’s ass.”

Do you want to see Johnson compete at heavyweight in the future?