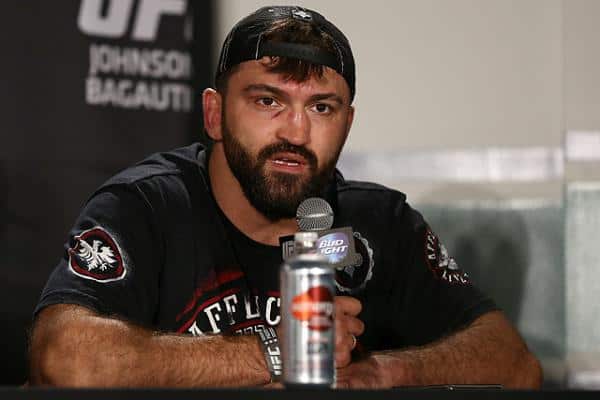 After a less than thrilling performance against Frank Mir at UFC 191, former heavyweight champion Andrei Arlovski had reportedly broken his hand. With a potential six-month layoff ahead of the veteran knockout artist, it looked as though he may have taken a big dent in terms of his title aspirations in the UFC. With huge finishes over Travis Browne and Antonio Silva, and the decisions over Mir and Brendan Schaub, it’s highly likely that one more convincing win will set ‘The Pitbull’ up for a chance at title glory once again.

The statement from the Nevada State Athletic Commission regarding Arlovski’s post-UFC 191 injuries was as follows:

“Andrei must have right hand X-rayed within three days; if X-ray positive for injury or no X-ray done suspended pending doctor’s clearance until March 5. Minimum suspension Oct. 6 with no contact until Sept. 27 for left eyelid laceration.”

The Belarusian striker dropped in on our good friends over at Submission Radio for a chat this week, and dropped some good news about his formerly believed-to-be broken hand:

“Everything’s okay. I saw the doctor today – a couple of hours ago – and it’s just bruised and that’s it,” Andrei told Submission radio. “Nothing’s injured bad. I’m not seriously injured or some broken bones or something. It’s just a bruise.”

Great news for ‘The Pitbull’ if he wants to get back in the mix again this year, which he indicates is possible, and that he will return to training in a matter of weeks:

“I’m not gonna start [training] earlier than October because obviously I wanna have a rest, and after that it’s up to the UFC. I’m ready to fight around December, January. So it’s totally up to the UFC.”

The reality is that Arlovski may have to face an unranked foe, or perhaps he’ll be able to step in as replacement for any of the above if they are injured.