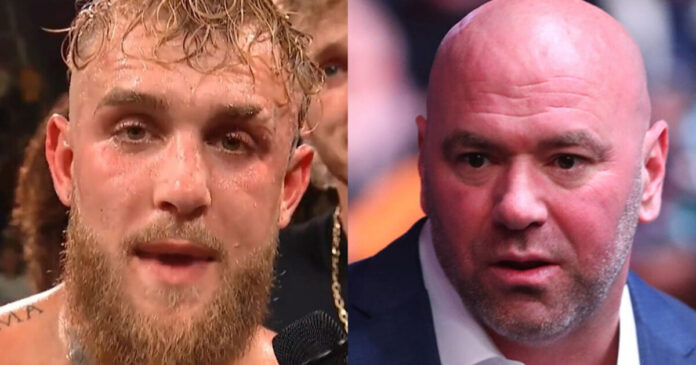 Jake Paul issued a fiery message to Dana White after coming out victorious over Anderson Silva.

This past Saturday, YouTube sensation-turned-boxer Paul took on legendary mixed martial artist Silva in a boxing match at the Desert Diamond Arena in Glendale, Arizona. Paul put in an impressive performance and even got a knockdown of ‘The Spider’ on his way to a unanimous decision win. He extended his unbeaten run to six with the biggest win of his career as a professional boxer.

Following the win, Jake Paul fired shots at UFC president Dana White for doubting that he could compete against the former UFC middleweight champion.

“Dana? Dana? Dana? “Bro, you said I wouldn’t do this, and I did it and with flying colors,” Paul said at the post-fight press conference for Paul v Silva (transcribed by Middle Easy). “He’s in hiding. He’s trying to do everything he can to stop my run, to sabotage my fights. He hates me. He hates what I’m doing. He hates that I’m exposing his business. Now we’re going to band together and create a united fighters’ association to help all MMA fighters and boxers to get more fighter pay, long-term healthcare.

“That’s a big, big undertaking that I’ve been wanting to do for the whole entire time of my career since I first met [my business partner] Nakisa [Bidarian]. I said that to him on the first day. I want to make a fighters’ union. So Dana White can suck this d***.”

Paul has been turning up the heat on his rivalry with White. He alleged the head honcho was ‘doing everything he can to hurt’ pay-per-view event. It will be interesting to see how the story develops and if Silva follows through with his bet of supporting Paul in his mission to launch a fighters’ association.