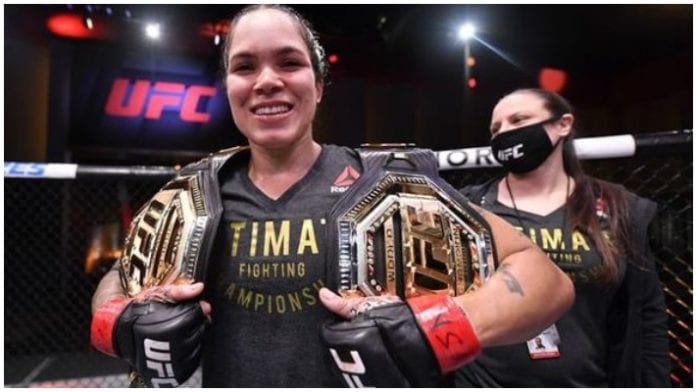 Amanda Nunes knows the featherweight division is barely a division. However, she wants it to stay.

Nunes is set to defend her bantamweight title for the first time since December 2019 when she faces Julianna Pena at UFC 265 on August 7.

It follows two relatively easy featherweight defenses against the likes of Felicia Spencer and Megan Anderson with many observers calling for the division to be shut down due to the lack of real contenders and competition for Nunes in that weight class.

UFC president Dana White even wants to shut it down according to Nunes. However, “The Lioness” wants it open as long as she remains champion.

“Dana [White] wants to end this division, but I told him that, as long as I’m champion, I want it open,” Nunes told Combate (via MMA Fighting). “I think the issue with the featherweight [division] is talent. I think it’s hard to find talented girls in this division.

“I could be wrong, but we’re seeing that the girls that fought Cris [Cyborg] needed a little bit more. Not that they are bad athletes, but they needed some work.”

While Nunes admits it is hard for the UFC to find real prospects to fill out the division, she believes she will always have someone to face at featherweight — whether they are natural 145ers or not.

“I’ll wait, I’m sure they will find someone,” she added. “They did that with Cris, brought in girls from God knows where to fight her. And even bantamweights will want to move up in weight so they get more comfortable. It’s better that way for me. Having an actual division or not, it doesn’t matter to me.”

For now, however, her focus will be on 135 when she faces a new challenge in Pena. Not that the Brazilian is too worried or anything.

“[Pena] is reckless,” Nunes said. “She takes you down but gets lost there. She doesn’t have a tight jiu-jitsu, and that’s when I plan on finishing the fight. She will come forward, pressure me and hope for the best, and that’s when I’ll use my angles, my kicks, my front kicks, my calf kicks, my knees, my elbows… Everything will be on point to use when she goes crazy.”