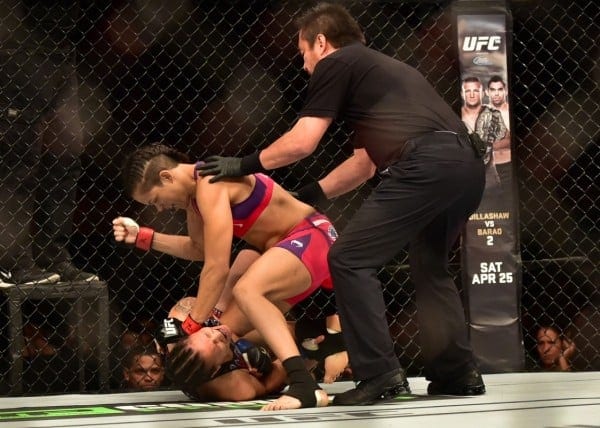 When Ronda Rousey announced she would be fighting Holly Holm in the main event of January 2, 2016’s UFC 195 on Good Morning America yesterday (August 21, 2015) thought-to-be title contender Miesha Tate was left out in the cold looking for a new opponent.

That void was quickly filled by UFC president Dana White, who suggested that “Cupcake” face off with surging Amanda Nunes at the same event as Rousey vs. Holm. “Amanda Leoa” is seemingly just fine with the potential booking, telling MMAFighting.com that she was surprised but ready to battle Tate:

“It took me by surprise, but I’m OK,” Nunes said. “I’m not upset. I want to fight soon and if Miesha isn’t going to fight [Rousey] any more, I’ll take this fight. I don’t have a problem fighting Miesha.”

The top-ranked Nunes comes in with the momentum of two straight finish wins, the most impressive being her recent one-round domination of former title contender Sara McMann at August 8’s UFC Fight Night 73 from Nashville, Tennessee.

In that fight, Nunes used the striking edge she honed as a member of American Top Team (ATT) to stun the Olympic silver medalist on the feet, following up with a rear-naked choke on the mat to seal up her biggest-ever win. Nunes envisions a similar result for Tate, no matter where the fight ends up:

“I always try to be fast and attack her mistakes, capitalize on her mistakes,” Nunes said. “Always I try to do that and it’s going to be harder for Miesha. I really believe wherever this fight goes, I’m gonna finish her.”

Yet even if Nunes does get a big finish over Tate at UFC 195, she still might not get the next title shot at the winner of Rousey vs. Holm. If the undefeated “Rowdy” wins as most are expecting, then her heavily hyped and long awaited showdown with Cris ‘Cyborg’ could finally become a reality, putting Nunes into a scenario where she’d most likely have to win another fight to get a title shot.

But this “Lioness” isn’t worried about, noting that her title shot will come when it’s simply her time. She’s just going to focus on the main thing she can control, and that’s knocking her opponents out:

“I really am gonna be ready for whatever happens,” Nunes said. “I know one day I’m gonna have the opportunity. I’m gonna knock people out. They’re going to see my fights. I’m patient. I don’t have anything to do but get in the cage and show my work and wait for my time. If the UFC wants to put somebody else, what am I gonna do? I have to wait. I don’t have any problems, either, to wait.

“I’m gonna keep knocking people out,” she said, “and soon they’re gonna give to me my opportunity.”