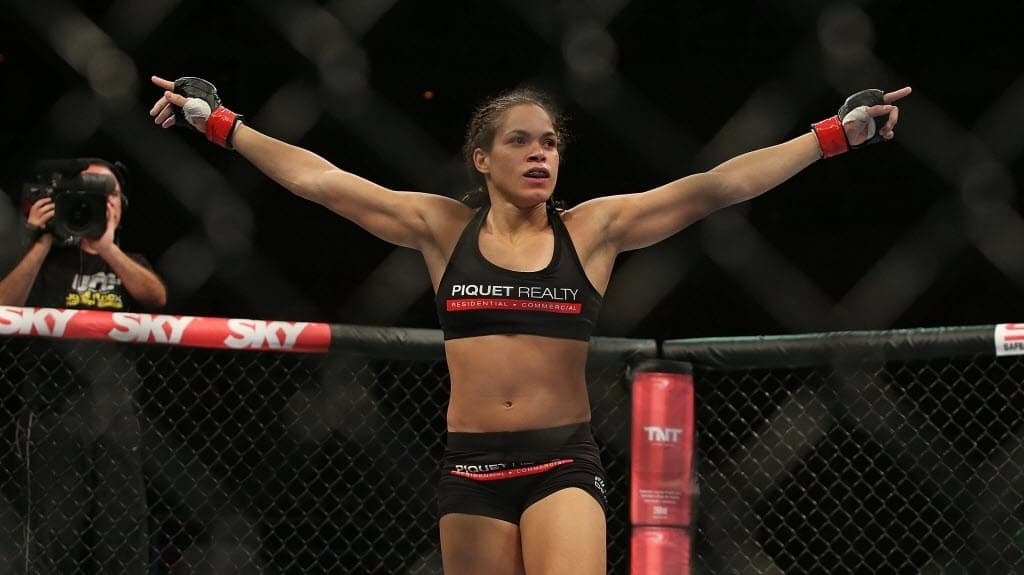 Amanda Nunes came dangerously close to earning a title shot last September when she took on now former title challenger “Alpha” Cat Zingano at UFC 178. Nunes seemed to be controlling the fight until Zingano came back and ended things in the third round, putting Nunes’ title hopes to rest.

The Brazilian has since bounced back, scoring a dominant victory over Shayna Bayzler in March, and she is now set to take on another former title challenger in former Olympian and No. 4-ranked Sara McMann at tonight’s (August 8, 2015) UFC Fight Night 73 from Nashville.

A win over McMann would undoubtedly put Nunes’ name back into title contention, and the Brazilian plans to show everyone why she is deserving of a shot at gold, and dominant champion Ronda Rousey:

Speaking on her opponent, Nunes and her team are well aware of McMann’s decorated wrestling pedigree, but Nunes claims that she is prepared for that aspect. The Brazilian slugger also stated that she’s going to try to finish the fight as fast as possible:

“She’s pretty strong in wrestling, we know that. We trained for that very well. I think she’s going to try to strike with me, but she’s going to go to her strong suit in wrestling and try to keep me on the ground, but I’m going to be ready for that,” Nunes said.

“I’m going to try to finish her as fast as I can but I’m going to be ready for three rounds.”

As far as the future, Nunes hopes to get through McMann, but understands that she may have to take another fight before fighting for gold, as Rousey is supposedly scheduled to meet Miesha Tate by the end of the year:

“Maybe after this fight but because Ronda already has a fight scheduled, I think maybe I’ll fight one more time rather than wait a long time. I’ll be ready,” Nunes said

As for what opponents may fit the bill for Nunes if she can get passed McMann, the Brazilian mentioned that rematches with top contenders Alexis Davis, and Zingano would be “amazing”:

“Yes for sure a rematch with (Cat) Zingano or Alexis Davis would be amazing,” Nunes said. “We’ll see, I’m going to be ready anyways. I’m very patient because I don’t need to talk, I need to show. I’m going to show everybody.”

Is Nunes getting ahead of herself by looking towards future possibilities?