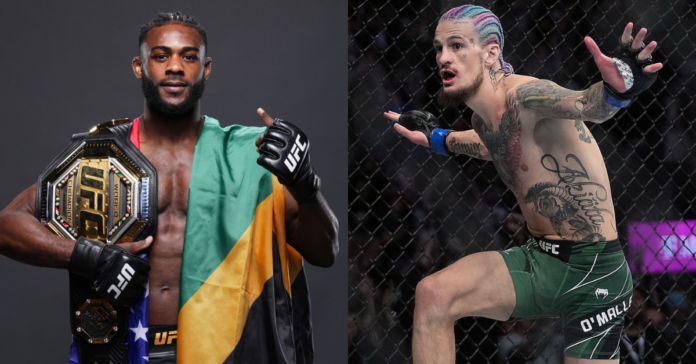 The UFC bantamweight world champion Aljamain Sterling is split on whether or not ‘Sugar’ Sean O’Malley is deserving of a shot at the crown should he win. Both of these men will be competing at UFC 280 upcoming on October 22.

Officially, O’Malley is ranked 12th in the division and will face the top-ranked Russian Petr Yan. While “Funk Master” will look to defend his throne against the former champion TJ Dillashaw at the same event. In an exclusive interview with James Lynch of LowKickMMA, Sterling discussed the prospect of a title shot should O’Malley defeat Yan. He said:

“It’d be hard to deny the guy, I think. That would be his first, well second real test if he passes. It would just be kind of weird if he were to get a title shot over ‘Chito’ the guy who knocked him out in the first round in like under three minutes.”

‘Funk Master’ Sterling is referencing O’Malley’s 2020 loss to “Chito” Marlon Vera, who is currently on a four-fight win streak in the division. Based on merit, Vera would deserve the title shot more. However, the undisputed UFC champion also recognizes that the UFC is a little bit of a popularity contest at times. ‘Sugar’ Sean O’Malley is a popular figure, certainly more than Marlon Vera. Sterling continued:

“Yes and no. I mean, if we’re going to be a popularity contest, which the UFC kind of is, then I would say it would be O’Malley.”

See the full interview with Aljamain Sterling and LowKickMMA below:

It will be a night of bantamweight action at UFC 280. The former UFC champion Petr Yan is looking to get back in the win column against the prospect ‘Sugar’ Sean O’Malley. Another former champion TJ Dillashaw will be looking to reclaim his lost throne when he meets “Funk Master” Aljamain Sterling in the UFC 280 co-main event.

Facing a talented former champion in Dillashaw, Sterling is excited about this match and says that he can likely finish him in the first round. In his exclusive interview with James Lynch of LowKickMMA, the US-born champion predicted:

“If I could get the squirmy little b*stard down in the first round I think I could choke him out in the first round. I really do think that. But I can foresee a second-round finish via ground and pound or submission.”