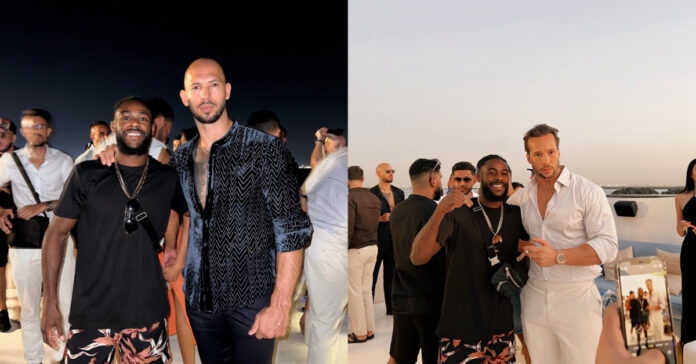 UFC bantamweight champion, Aljamain Sterling met up with Andrew and Tristan Tate ahead of his bout at UFC 280.

Sterling is set to defend his 135lb title next Saturday in Abu Dhabi in the co-main event of UFC 280 against T.J. Dillashaw. To get acclimatised to the heat and the time difference, athletes tend to go out a couple of weeks early and doing so also allows the fighters to enjoy the luxuries of Dubai.

‘Funk Master’ would post to his twitter him pictured with controversial internet sensation Andrew Tate and his more reserved but just as opinionated brother Tristan Tate.

“Top g’s never die!” Sterling tweeted. “Good chopping it up with you fellas.”

The Tate’s garnered worldwide attention earlier this year after their internet campaign saw their controversial videos reach millions of people. Both have come under heavy scrutiny due people deeming their language and beliefs to be misogynistic and their message, often aimed at young men, regarded as harmful.

It wouldn’t surprise you that Sterling would catch some heat from fans, with many replying to him criticising him for supporting the Tate’s.

What do you think of Aljamain Sterling and the Tate’s hanging out?

READ MORE:  Jon Anik explains that Dana White may fire him at any time: "He won’t hesitate to get rid of me."