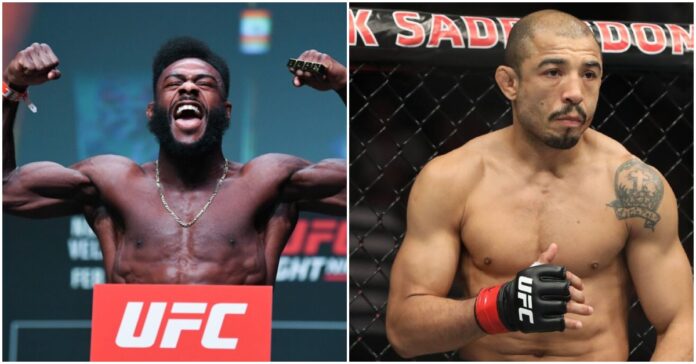 UFC bantamweight champion Aljamain Sterling has called for a meeting with UFC president Dana White following Jose Aldo’s call for a shot at the title.

Aljamain Sterling was able to retain his bantamweight strap following his hard-fought decision victory over Petr Yan at UFC 273. Scores were divided among fans however credit must be given to Sterling as a large portion of the community had written him off before this rematch and simply gave him no chance.

Aldo took to social media to call for his shot at the bantamweight strap before Sterling replied requesting a sit down with the boss.

“u said I would be next on merit and I’m here accepting your challenge, @danawhite send me the contract soon before he changes his mind!!”

Aljamain Sterling responded saying: “[email protected] Hey man, when are we having a sit down? We clearly have a lot to discuss…

PS: Go watch the first round again. You are WRONG!

Jose Aldo has more than earnt his shot to the title, after losing to Petr Yan in an attempt to secure bantamweight gold he’s gone on to accumulate a three-fight win streak holding victories over Marlon Vera, Pedro Munhoz, and most recently Rob Font cementing himself still as a top contender in the division.

Originally it seemed like the current division champion had his eyes set on TJ Dillashaw as the next threat to his throne, but a change of feeling has now taken Aljamain Sterling away from that idea and drawn his attention to Aldo.

Following on from Sterling’s victory at UFC 273, he offered all of his ‘doubters’ the opportunity to apologize to him by filling out the apology form he uploaded on Twitter.

Who do you think wins in a potential Sterling vs Aldo matchup?