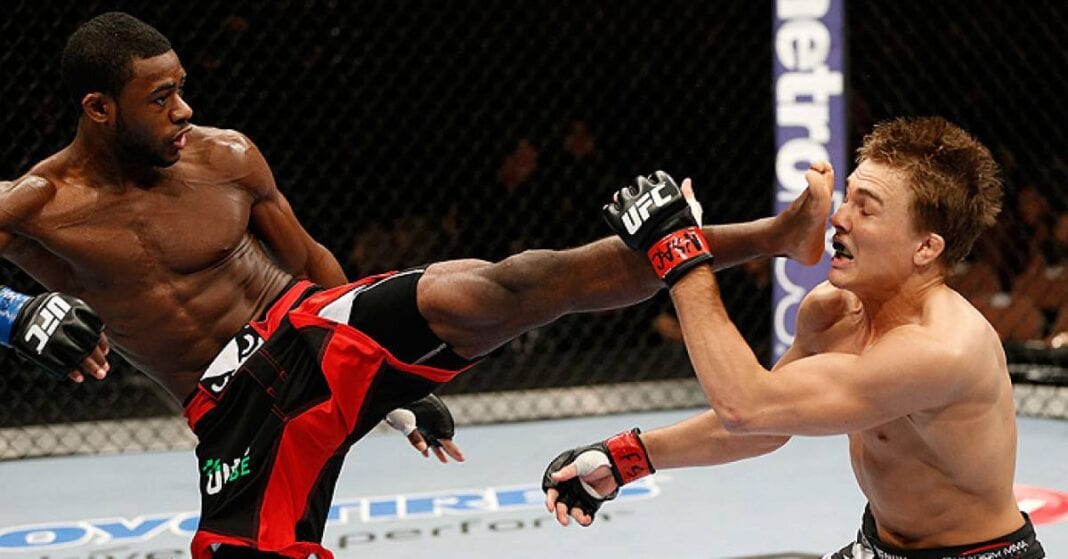 It seems as if no fighter has been looking for a fight more actively than rising bantamweight prospect Aljamain “The Funk Master” Sterling. Sterling has called out almost all of the 135-pound division via twitter, and even recently said that he would have to consider going back to graduate school if he couldn’t get a fight.

Well, all fans of “The Funk Master” can take a breath, as the Serra-Longo product appeared on today’s (September 28, 2015) edition of the MMA Hour to reveal that he finally has a fight booked:

“This is the weirdest thing. I’ve been told one thing, that all these guys turn me down, x,y, z. Then I take to Twitter and some of these guys say they will fight me, then you don’t hear anything else for the next few weeks. I guess I complained so much that I ended up getting a fight. And it’s like, dude, this is all I ever wanted; a name on paper so I can have the peace of mind, the security that it’s definitely going to happen and that I’m not just sitting here twiddling my thumbs and nothing’s going to happen. So, I ended up getting a fight, I am fighting the No. 9 guy, Johnny Eduardo. I’ve been calling that guy out; I would have loved to fight him in Orlando, but now this fight will be on December 10 on Fight Pass. So I think my complaining was good and bad at the same time. It worked into my favor that I got the fight and got the security and peace of mind, but then I went to a big slot on the card from kind of a … I mean, it’s going to be a big weekend anyway. So hopefully the fight gets the promotion it deserves, and the card in general, so a lot of people will tune in to make sure they watch because I am going out there to pop this guy’s head off and squeeze the hell out of him.”

Although it may not be the platform he was looking for, Sterling has received a solid top 10-ranked opponent in Johnny Eduardo. The Brazilian is 2-1 inside of the Octagon including a decision win over Jeff Curran, and most recently a knockout of Eddie Wineland last May.

“The Funk Master” on the other hand, sits at an undefeated 3-0 in the UFC which includes a decision win over Cody Gibson, as well as impressive finishes over Hugo Viana, and Takeya Mizugaki last April.

In the contender-scarce 135-pound division, this bout could decide the next challenger to fight the winner of January’s TJ Dillashaw vs. Dominick Cruz title fight.

UFC Fight Night 80 is being headlined by a women’s strawweight bout between rising star Paige VanZant, and Joanne Calderwood. Stay tuned to LowKickMMA for all news as the event nears closer.