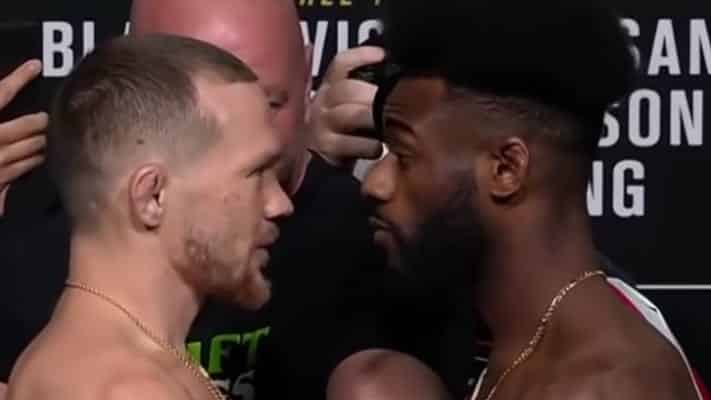 Next up on the UFC 259 main card is a bantamweight title fight between Petr Yan and Aljamain Sterling.

Round 3: Sterling lands a body kick. Yan connects with a leg kick soon after. Sterling starts to employ jabs. Yan responds with a body shot and connects with a left soon after. He defends a takedown and lands a knee on Sterling. Yan is the aggressor now. Yan slips and his body kick lands. Yan is putting the pressure on but Sterling is still in it though he is considerably slower. Sterling looks for the takedown but Yan defends well throughout like he’s done for much of the fight. Sterling is now very tired as Yan is virtually ragdolling him. Sterling lands a couple of leg kicks to good effect though. The round ends with Yan taking Sterling down.

Round 4: Yan is putting the pressure on now but Sterling is still in it. Sterling is continuing to put volume but Yan is blocking and checking everything. Yan connects with a body kick. Sterling goes for another takedown but Yan defends with ease. Sterling misses a telegraphed spinning back kick. Yan lands a body kick and gets a straight left to land as well. Yan lands some more lefts and follows with a knee. Yan connects with a one two. Sterling eats it and attempts some head kicks. Sterling goes for a takedown but Yan has him down on the ground. Yan lands a knee while he’s downed which is illegal as the fight is momentarily stopped. The fight is called off.