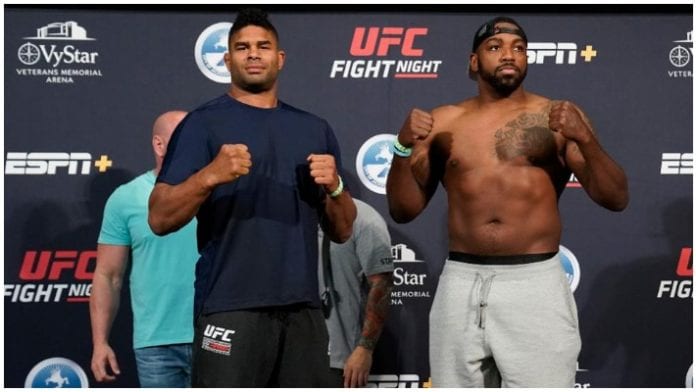 Next up is the final fight of the night. Heavyweight legend Alistair Overeem will be hoping to get back to winning ways after losing by fifth-round KO against Jairzinho Rozenstruik. Walt Harris who’s returning to the octagon for the first time since the passing of his stepdaughter late last year. ‘The Big Ticket’ is determined to make her proud by beating Overeem and stretching his current win streak to three in a row. Can he do it? Let’s find out…

Round 1: Walt Harris is pushing forward and tries to throw a big punch. Alistair Overeem ducks out the way well. The Dutch fighter throws a lovely spinning back kick to the body. Harris lands a huge combination to drop Overeem. He’s on top reigning down massive strikes. Harris is unleashing punches for almost a minute but Overeem is staying in the fight and the referee is letting the fight continue. He eventually creates a scramble and works his way back to the feet – WOW that was so close to being over. Overeem manages to get the takedown and lands on the back of Harris. There is so much time for Overeem to work. He’s landing constant shots over and over again. Overeem is hammering down shots as the clock ticks down, Harris has just got to survive now. Ten seconds left Harris tries to stand up but eats two big knees to the body for his troubles as the horn sounds.

Round 2: One minute into round two and both fighters look to be taking their time after an explosive first round. Overeem lands a huge head kick followed by a right hand to drop Harris. The former heavyweight title challenger takes the back and begins hammering in strikes in an identical spot to what we saw in round one. Harris is flattened out completely now taking consistent heavy shots and referee Dan Miragliotta has to step in and wave off the fight.