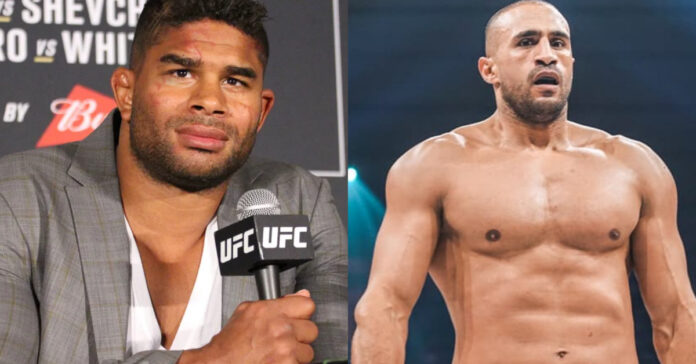 Alistair Overeem is feeling confident going into his third fight with Badr Hari.

After moving away from mixed martial arts, Overeem is set to mark his return to competition against Hari at Glory Collision 4 on Oct. 8 in Arnhem, Netherlands. ‘The Demolition Man’ went an even 2-2 in his last four outings under the banner and was unexpectedly released from the UFC after a loss to Alexander Volkov in Feb. 2021.

In a recent appearance on The MMA Hour, Alistair Overeem talked about coming back to fighting professionally after a year and eight-month hiatus.

“It’s been in a minute but again, eager to get back in there, shape is tremendous, phenomenal,” Overeem said (ht Middle Easy). “I’m just hungry to get back in there and yes last fight was a bit ago but you know you’re fighting in the gym, right? You’re sparring in the gym so it’s not like there’s no activity. It’s not like I’m laying on the couch. I always train,  I’ve turned everything up not one but five notches for this fight.“

Overeem is targeting a fight with Rico Verhoeven

Overeem hinted that he would train even harder for a potential bout with the reigning Glory heavyweight champion Rico Verhoeven after.

“And we’re probably going to turn it up two more for the Rico fight. Not looking ahead of things but I do believe I’m going to come out of this victorious with everything I have. And that’s gonna be interesting.”

Given the heated rivalry Overeem shared with Hari, he expects there to be tension and believes he has done enough to come out on top.

“Listen, I did my homework and I improved and we turned everything up not one but five notches. We’re there for the win. I’m in the best shape of my life,” he said. “I’m 42 years old, but the best shape is now and just excitement, just excitement. Listen, there’ll be some tension. There’ll be some adrenaline boiling right because you know, there’s gonna be some collision, Collision 4 but yeah, I did my homework.”