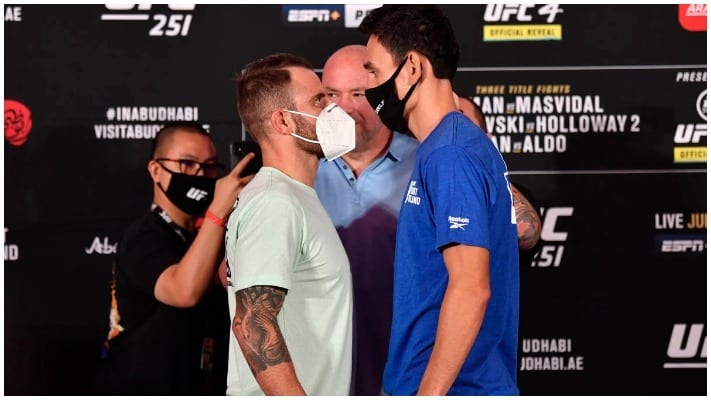 In the UFC 251 co-main event Alexander Volkanovski will defend his featherweight title for the first time against the man he dethroned in December 2019, Max Holloway. Will it be a repeat or revenge? Let’s find out…

Round 1: It’s a tentative start to the fight. Alexander Volkanovski has tried a few leg kicks early – Max Holloway will be familiar with them after the pairs first meeting at UFC 245. Mid-way through the opening stanza and Holloway is starting to land. He lands a nice body shot and an uppercut. Volkanovski continues to rattle off low leg kicks. Holloway lands a big right hand and Volkanovski wobbles (slightly). ‘Blessed’ picks up on it and mocks his opponent by wobbling himself. Holloway lands a spinning back kick to the midsection and follows it up with a head kick. Volkanovski drops to the mat but quickly bounces back to his feet as the round ends.

Round 2: Volkanovski lands three low leg kicks at the start of round two. Holloway fires back with kicks of his own before putting hands on Volkanovski – his striking looks so crisp tonight. More leg kicks. Lot’s of them from both men. Holloway lands a big knee to the mid-section. Volkanovski lands a nice left hook as Holloway rushes in. ‘Blessed’ is unfazed and gets back to his striking. Holloway tries another high kick which just misses Volkanovski. The former champ catches his opponent with an uppercut and drops him again just before round two draws to a close.

Round 3: Volkanovski goes straight back to his leg kicks. They are landing and Holloway’s leg is looking a little sore but it doesn’t appear to be bothering him. He continues to be a threat with the hands and the feet. Volkanovski rips to the body while Holloway simultaneously scores to the head. The champ shoots in for a takedown. Holloway defends but he’s backed up against the fence right now. Both men grapple for position before eventually disengaging. Holloway lands a hook to the head and knee to the body on the exit. Volkanovski is starting to let his hands go. A nice left lands and a few more just miss. A nice jab for the Aussie who is having his best round of the fight. The horn sounds to end round three.

Round 4: Both men trade shots at the start of round four. Volkanovski lands a few leg kicks but they don’t seem to be bothering the Hawaiian. Two leg strikes from the champion. Two leg kicks from Holloway. ‘Blessed’ attempts a flying knee which just misses but he manages to land a straight shot in the exchange. Big lead uppercut from Holloway which backs Volkanovski up against the fence. Holloway doesn’t follow up and they go back to the center. They initiate the clinch and Volkanovski secures the takedown. Holloway quickly pops back up to his feet. Another takedown attempts from Volkanovski but he eats several strikes for his efforts before disengaging. Huge right hand at the end of round four from Holloway who tries an extravagant head kick as the horn sounds.

Round 5: A quick start to round five. Both guys are throwing big but not a lot is landing right now. A brief break in action before they go back at it. Holloway tries another high kick which is blocked but it still looked powerful. Volkanovski tries for the takedown but doesn’t get it – Holloway again makes him pay as they separate. Volkanovski is getting after it right now. He’s throwing big shots but so is Holloway. Both continue to land. Holloway lands a one-two down the pipe – beautiful stuff. Volkanovski secures his second takedown of the fight. He doesn’t maintain top position and Holloway impressively pops back to his feet. Volkanovski lands a nice left hook. Holloway lands an uppercut. Volkanovski tries for another takedown but is shrugged off. He eats a couple more shots before trying for another takedown which is shrugged once again. The 10 second horn sounds and Volkanovski gets another takedown but is unable to do anything with it as the fight ends.