LowKickMMA.com
Home UFC News Alexander Volkanovski On Max Holloway: ‘He Doesn’t Look Like That In Front... 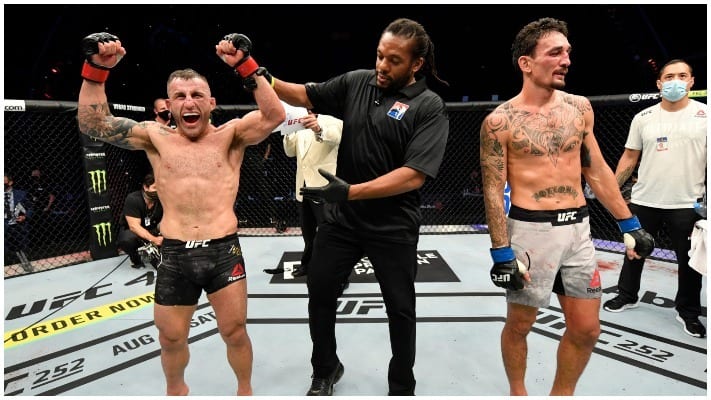 Holloway made headlines for his masterful performance against Calvin Kattar that resulted in a lopsided unanimous decision win in the UFC Fight Island 7 headliner this past weekend.

It led to calls for a trilogy fight with Volkanovski as despite Holloway being 0-2 against the champion, many feel this version of “Blessed” is more than capable of coming out on top — especially as many believe he should have won the rematch at UFC 251 last summer.

However, as far as Volkanovski is concerned, that version of Holloway was always there. He just happened to shut him down on two occasions.

“I was definitely watching, and yeah Max put on a good show,” Volkanovski said on Submission Radio. “I knew he would get the win. He put on the pace, and yeah, Kattar just couldn’t keep up. So, it was a good showing.

“He doesn’t look like that in front of me, plain and simple. And I don’t mean that as disrespect, but I shut him down, and that’s plain and simple. He was breaking records with numbers, and he’s always a high-volume fighter, he’s always looking good when there’s other people in front of him. But when it’s me in front of him, I just don’t let him do his thing. But in saying that, he did definitely put on a good performance, and I’m gonna credit him for that. But at the same time, he don’t look like that in front of me.”

Volkanovski is currently set to defend his title against Brian Ortega in a fight slated for UFC 260. However, he still doesn’t feel a trilogy with Holloway afterwards makes sense — even after the latter’s performance this past weekend.

That said, he isn’t ruling it out completely.

“Is it going to be further down the track? Look, I’m not gonna say that’s not gonna happen. I believe that Max is doing what he needs to do to stay a number-one contender, and if we have to meet again, we have to meet again. But at the same time, there’s going to be a different opponent in front of me, and that’s what I’m gonna focus on. But yeah, we’ll see what happens.”

Do you believe this is a different version of Holloway? Or was it the same and Volkanovski just shut him down?