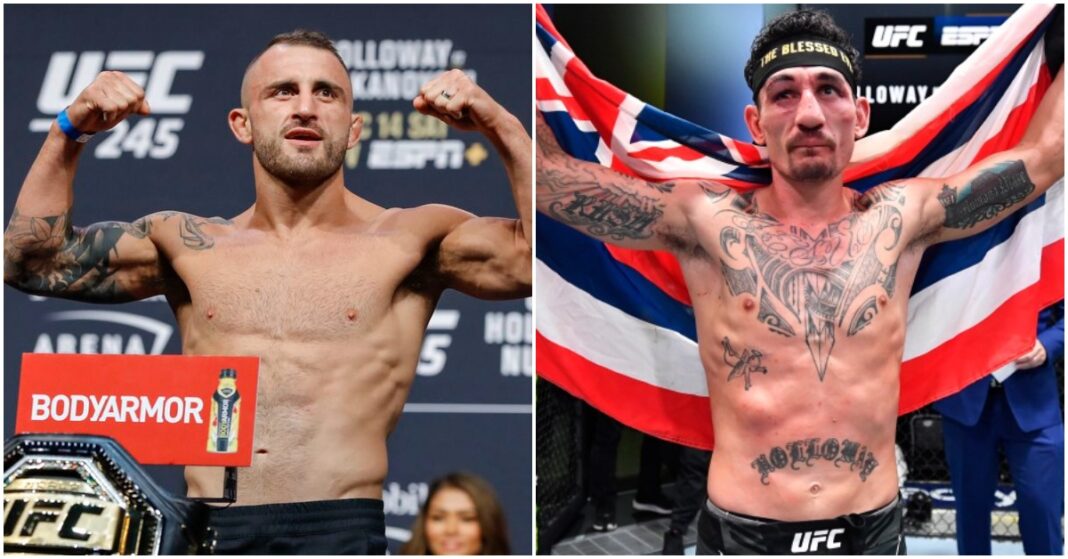 Alexander Volkanovski thinks Max Holloway is taking too many shots when he fights after watching ‘Blessed’ go to war with Yair Rodriguez for five rounds at UFC Vegas 42 this past weekend.

Holloway’s barnburner with Yair Rodriguez marked his fourth fight in a row, and the sixth of his last seven where he’s taken at least 100 strikes from his opponent.

At UFC Vegas 42 the former featherweight king reached a new benchmark when he became the first fighter in history to land over 3,000 significant strikes inside the octagon. Holloway pretty much owns all the striking records in the UFC, with his 251 strikes landed against Rodriguez just adding to his achievements.

The UFC featherweight champion reacted to Holloway’s latest victory during a recent interview with Ariel Helwani and noted that there’s only so long his rivals chine will hold up for.

“Man, Max eats a lot of shots,” Volkanovski said on The MMA Hour. “He’s a volume striker, but he’s happy to eat one to give a couple. But, I mean, how long can that last?

“I’m telling you, that chin’s going to go soon. It is going to go soon. You cannot cop that much damage. Yeah, they’re talking about 3000 strikes he’s [landed], which is incredible. Clap for that. But he’s probably in the 1000s or 2000s of absorption as well. There you go, that’s not healthy. And Conor [McGregor] touched on that actually. Conor makes a good point. You talk about being a boxer — it’s hit and not get hit. That’s what makes the best boxer. So, you look at the numbers he’s hitting a lot of numbers, but let’s look at other numbers. Let’s look at ratios. Let’s look at how many strikes they’re landing to not landing.

Do you think we will see a third fight between Alexander Volkanovski and Max Holloway?