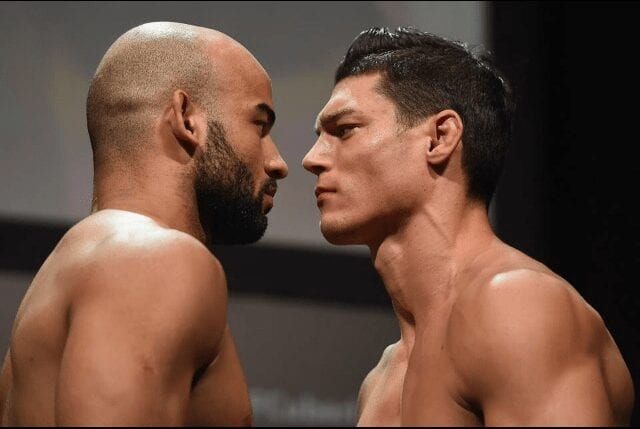 After three rounds of back-and-forth action, the bout went to the judge’s decision and it ended up being quite a controversial one. All three of the judges scored the bout 29-28 for the Brazilian Alves, but Jouban didn’t agree. He spoke up about the controversy at the UFC Fight Night 56 post-fight presser:

“First off, I didn’t agree with the judges, obviously. I give Warlley a lot of credit, he brought a great fight. He’s definitely a tough competitor. I feel like some of the shots I hit him with might have taken out other guys and he stayed on his feet, so all credit to Warlley.”

Jouban continued on to admit that he feels he dropped the first round to Alves, but that was it:

“I felt like he won the first round. He got the takedown in the second, but I got up and finished strong. The third round was pretty obvious,” Jouban said. “I gotta go back and look at it, but first thoughts after the fight I was kind of upset with the decision.”

Alves, fighting in front of his home country, obviously disagrees with “Brahma.” He believes he did enough to take the first two rounds over Jouban and enough to win the fight:

“I believe the first round was mine. The second round was closer, but I managed to take him down and hold him there. The third was clearly his,” Alves said. “The judges are prepared to judge under the UFC rules, and I trust their decision. I won’t leave it to the judges next time.”

In this case, I’d have to agree with Jouban. Alves came out guns blazing in the first round, landing some big shots and almost finishing the fight, but it looked like he gassed soon thereafter. Over the next two rounds he landed some more big shots and secured a takedown, but Jouban was the far superior volume puncher. “Brahma” repeatedly landed shot after shot and beat Alves up a bit, which I thought was enough to earn the win.

It was definitely a very close and entertaining fight. Do you agree with the official decision? Check out the judge’s scorecards below: