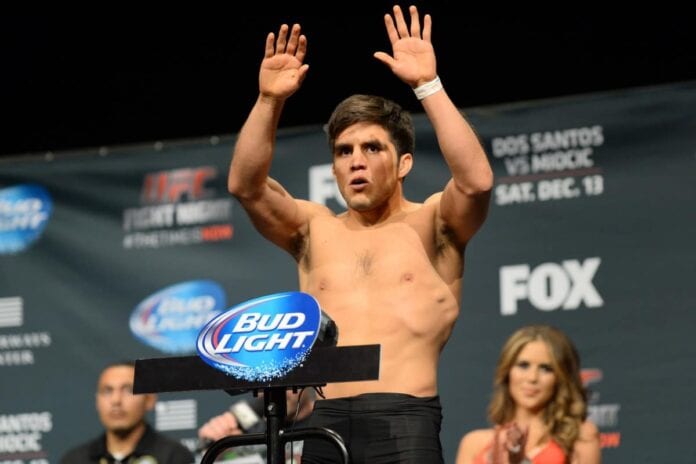 After the Nevada State Athletic Commission (NSAC) shockingly suspended Nick Diaz for five years due to a failed UFC 183 drug test for Marijuana metabolites, the support for the Stockton welterweight, and middleweight has been tremendous.

Fans, fighters, and media members have voiced their displeasure, with many noting that they are absolutely disgusted by the actions of the commission.

Diaz took on all-time great Anderson Silva at UFC 183, and ironically, “The Spider” tested positive as well. Silva popped for multiple performance-enhancing-drugs (PEDs), but was only given a one year suspension as opposed to Diaz’s five.

The Stockton bad boy has tested positive three times over the years in Nevada, but five years for Marijuana is rather ridiculous, and it has not been taken lightly in the mixed martial arts (MMA) world.

The latest fighter to back Diaz is rising flyweight contender Henry “The Messenger” Cejudo, whos manager recently wrote a letter to the NSAC, saying that he was appalled by the decision, and the process, also stating that Cejudo will not be fighting in the state of Nevada (Via MMAFighting):

“I am absolutely appalled at how the NAC handled the Nick Diaz matter. The issue here is not the magnitude of the penalties assessed to Nick Diaz, it is the process, or lack thereof, in determining Nick Diaz’s guilt or innocence.  Significant discrepancies existed between the test samples, and the NAC has an absolute obligation to resolve those discrepancies before the penalty phase of the disciplinary hearing was heard. What the NAC did was ignore due process and go straight to the penalty phase.

Forget the facts and existence of evidence, let’s get down to the business of punishment. For the NAC to ignore the negative test results from Sports Medicine Research and Testing Laboratories (SMRTL), a WADA-approved testing facility specializing in the detection of performance enhancing drugs (PEDs), in favor of a “questionable” result from a non-approved and non-specialized PED facility is simply astonishing. For Chairman Aguilar to also state, “I think we do have a positive test today,” is an appalling disregard of the full and careful consideration of all the facts. I believe it is an abuse of power under the color of authority, and a direct affront to the very concept and practice of due process. For NAC to further justify their decision based on the assertion that they don’t have the budget to use a WADA-approved testing facility is like saying, justice and due process only applies if it comes at a deep discount and is affordable. The NAC decision does not appear to be based on fact or evidence, but on emotional arrogance.

I sincerely hope that the UFC enters the dialogue on this issue. If not publicly, then privately. It is very unfortunate, but I feel it’s prudent to let the UFC know that Henry Cejudo will not be fighting in Nevada. I simply have no confidence that the NAC can manage a fair and credible testing process, or will act in a fair and unbiased manner. Henry has been tested well over a hundred times under the USOC/USADA program and never had  a positive test result. That is because he has never used a banned substance, but also because, in each and every case, the testing was done by competent and unbiased personnel under a credible program utilizing WADA accredited labs.

I personally applauded the UFC for imposition of their anti-doping policy, as it comes with the legacy and credibility of USADA, as well as appropriate protocols and processes to ensure fair and credible testing. The opposite appears true with respect to the NAC.  Until the NAC testing process can be independently reviewed, its findings made public, and corrective action taken, I personally do not believe it is a safe or credible place to conduct business. That includes a review of the recent actions and competencies of Commission members.

Others may want to roll the dice in Nevada, but I for one do not feel the NAC is capable of conducting itself in a manner consistent with their mission statement, appropriate enforcement of existing regulations, conducting business in a fair and unbiased manner, or the exercise of due process in their enforcement actions.”

“The Messenger” has a huge bout ahead of him as he is set to take on No. 3-ranked Jussier Formiga in what could very well be a title eliminator bout. Luckily for the UFC, this bout is scheduled to go down in Mexico in November.

Will Cejudo stay true to his claim, and will other fighters follow his lead?