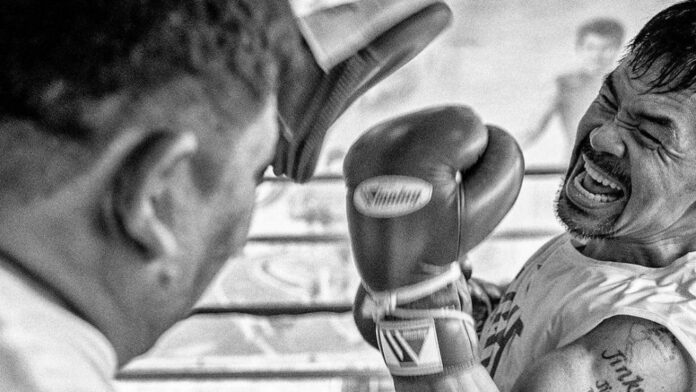 Guest post by Evolve MMA, Asia’s premier championship brand for martial arts. It has the most number of World Champions on the planet. Named as the #1 ranked martial arts organization in Asia by CNN, Yahoo! Sports, FOX Sports, Evolve MMA is the top rated boxing gym in Singapore.

The boxing uppercut is one of the most devastating punches in the sport of boxing. It carries insane momentum from the waist, and drives upward, exploding through its intended target like a hand grenade.

Uppercuts, when executed at the right time and with the correct technique, can effectively incapacitate any opponent. As the punch makes contact, any man can get his lights turned out or the wind sucked out of his sails.

However, uppercuts are notoriously difficult to land. They are easily telegraphed and are susceptible to blocks and parries. So whenever an uppercut knockout happens, it’s a truly special moment.

Throughout the history of boxing, a plethora of uppercut knockouts have wowed audiences. They’ve produced adrenaline-inducing sequences with jaw-dropping results. Fans love them when they happen.

Heavyweight legends Rocky Marciano and Joe Louis met each other in an intense battle in 1951, which left fans in a thunderous chorus of applause at its incredible conclusion.

Marciano and Louis are two of the best heavyweights in the history of boxing. “The Brockton Blockbuster” is the only heavyweight champion to have completed his career without a loss. Meanwhile, “The Brown Bomber” was one of the winningest fighters ever, with the longest reign as a boxing champion in history.

After an intense back-and-forth battle, Marciano ended matters against Louis in the eighth round, with a combination that sent the latter through the ropes. Although the fight-ending punch was indeed a right straight, it was a pair of hard, left uppercuts that ultimately set up the finish.

Marciano actually came into this fight as an underdog who upset the betting favorite. The fight was Louis’ last as a professional boxer.

The first meeting between “Big” George Foreman and “Smokin’” Joe Frazier was nothing short of an epic encounter. The fight took place at the National Stadium in Kingston, Jamaica, and was for the WBC and WBA World Heavyweight Titles.

This bout featured two heavyweight beasts in their physical primes. Foreman came into the fight with a perfect 37-0 record with 34 KO’s, and Frazier came in at an unblemished 29-0 with 25 KO’s. Needless to say, it was a fight for the ages.

It was, however, a one-sided beating in favor of “Big” George. Frazier suffered six knockdowns within two rounds, eventually succumbing to Foreman’s ungodly power. What made this knockout special was that Frazier was lifted off his feet by the sheer force of a single right uppercut.

To his credit, Frazier survived all six knockdowns to make it back up to his feet. But that last one had him on unsteady footing and the referee deemed he had enough.

Already an established elite fighter at the time, Juan Manuel “Dinamita” Marquez took on young gun Juan “Baby Bull” Diaz at the Toyota Center in Houston, Texas with the WBA, IBO, and vacant WBO World Lightweight Titles at stake. It was a showdown between a wily veteran and a rising star.

At this point, Marquez had just finished two fights with Manny Pacquiao, the last one at super featherweight. After Pacquiao moved up, Marquez chased him through the divisions, taking on Joel Casamayor first before Diaz.

Known for his counterpunching wizardry, Marquez peppered a game but overmatched Diaz with pinpoint accurate combination punching. In fact, Marquez was so accurate, especially with his uppercuts, that Diaz simply had no answer for them and eventually fell.

Diaz was aggressive, for sure, and he kept coming forward. But Marquez left him in a wreck when it was all said and done. The end came swiftly after a vicious right uppercut decked Diaz for good in the ninth round.

Multiple-division boxing world champion, American legend Roy Jones Jr. had a penchant for showmanship. He brought an unrivaled flair and flamboyance to his fights that have, quite frankly, never been duplicated to this day.

Jones was known to rap his way to the ring, knock out his opponents, and rap his way back to the dressing room. Against Vinny Pazienza in 1995, the former pound-for-pound king put on an absolute show for his fans at the iconic Convention Center in Atlantic City.

Then the IBF Super Middleweight World Champion, Jones took care of business against the two-time former world champion Pazienza, knocking his opponent down three times in the sixth round. There was no three knockdown rule in effect, but it didn’t matter. After a competitive fight, Jones ended matters with a sick six-punch combination punctuated by a pair of lightning-quick uppercuts.

Filipino megastar and boxing’s only eight-division world champion Manny “Pacman” Pacquiao made a name for himself early in his career by knocking guys out with ease in the lighter weight divisions.

In December 2004, Pacquiao returned from a stint in the United States to fight in his home country of the Philippines, taking on Narongrit Pirang, also known as Fahsan 3K Battery, at the MC Home Depot Open Air Arena in Taguig City.

In true Pacquiao fashion, the Filipino firebrand made quick work of Narongrit, dropping the Thai fighter once in rounds two and three, and twice in round four. The final knockdown showcased Pacquiao’s awesome one-punch knockout power.

Feinting with a right, Pacquiao came right up the middle with a stealthy left uppercut that literally sent Narongrit into the air and onto the canvas. Needless to say, the partisan Filipino crowd that chanted “Manny! Manny!” all night erupted in rapturous applause.