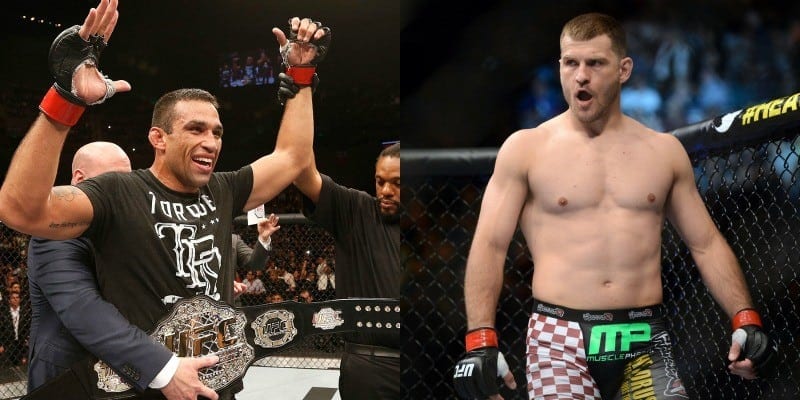 Things were shaken up, however, when Velasquez was forced out of the bout yesterday (January 24, 2015) due to a back injury suffered in training. The UFC quickly announced that No. 2-ranked Stipe Miocic would step up on short notice to battle Werdum for the title, which is why fans were so shocked to hear today (January 25, 2016) that Werdum will also be pulling out of the fight due to an injury.

Speaking with MMAFighting.com, “Vai Cavalo” elaborated on his injury, adding in that if Velasquez hadn’t pulled out that he would’ve still fought:

“I was already injured,” Werdum told Brazilian journalists on Monday. “I have a foot injury, and haven’t been able to throw kicks in training for two weeks. I would still fight Cain because I was injured the last time, but I also hurt my back last Friday. I went to the doctor, tried to continue training, but couldn’t spar as I should spar.

“I decided not to fight because I’m not 100 percent,” he continued. “If Cain was the opponent, I would go on. It’s not his fault, it’s nobody’s fault. Injuries happen. You can’t avoid them. I have no option. I made this decision because I’m not feeling 100 percent.”

Team Miocic wasn’t too pleased with this, as the Croatian’s manger said a champion shouldn’t “pick and choose opponents”:

“We’re extremely disappointed to hear that Werdum is pulling out of the fight,” Miocic’s manager, Greg Kalikas, told MMAFighting.com via text message. “If he’s [Werdum is] healthy enough to defend against Cain, we can’t understand why he’s not healthy enough to fight Stipe, who would only have 12 days to prepare for him as it stands.

“A champion shouldn’t pick and choose opponents. A true champion fights all comers. If he won’t fight Stipe with a short camp, are we supposed to believe he’d fight Stipe coming off a full training camp? No, he wouldn’t… and that’s a bad look for the supposed best heavyweight on the planet. All we can hope is that Werdum ‘heals’ up quick and will agree to fight Stipe sooner rather than later.”

Do you agree with Miocic’s manager, or should Werdum heal up and fight at his best?